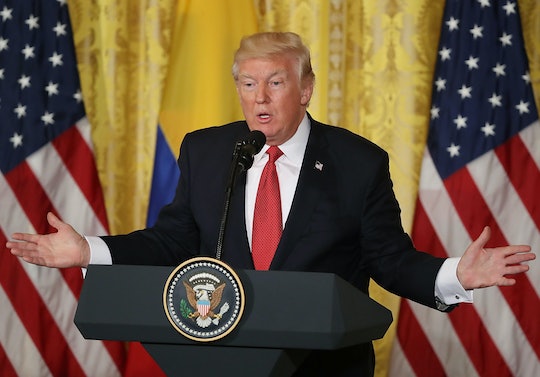 Fresh from his nine-day maiden voyage around the world, President Trump has come home to a White House mired in investigations and inquiries left unaddressed during his first foreign trip. Mike Dubke leaving the White House certainly isn't going to help Trump, either. Who is Mike Dubke? The White House communications director resigned on May 18 in a private meeting with Trump, but his resignation only became public Tuesday morning, POLITICO reports. Dubke only served three months in his role with the White House.

Speaking to POLITICO, Dubke said his resignation as the White House communications director was for personal reasons and did not elaborate further. Representatives for Dubke did not return Romper's request for comment. Dubke was brought in as a last-minute replacement for a senior member of Trump's campaign staff, Jason Miller, who abruptly resigned in December after initially accepting the appointment. Dubke was a Trump campaign outsider, putting him at odds with much of the White House administration, aka, Trump's campaign cadre of "yes" men and women. A senior administration official told Axios that Dubke is "parting on good terms," and offered to remain in the role until the president had returned from his overseas trip.

The 47-year-old career political strategist brought with him a stellar resume of political strategy and communications experience. Dubke is the co-founder of Crossroads Media, a Republican media services firm associated with Karl Rove that rose to prominence during the 2008 presidential election. In his role as communications director, Dubke worked closely with Press Secretary Sean Spicer, The Washington Post reported. After Miller's resignation, Spicer was forced to juggle both roles of press and communication secretaries; Dubke was brought on in mid-February by the Trump team when the dual role became too much for Spicer.

Even though Dubke maintains that this resignation was for personal reasons, CNBC political correspondent Eamon Javers noticed a peculiar bit of White House chronology in the timing of his exit: Dubke tendered his resignation a day after former FBI Director Robert Mueller was named special counsel in the ongoing Trump-Russia investigation.