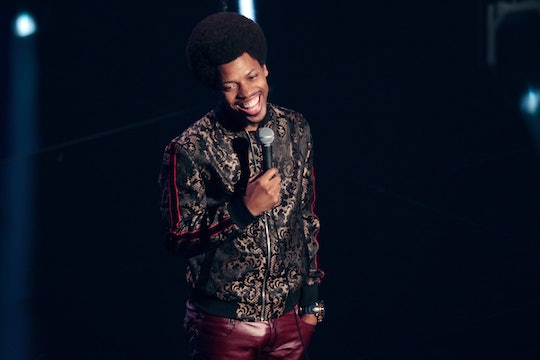 Amazon Prime is just beginning to dive into the stand-up comedy genre, a space where Netflix has been building a stellar reputation for years now. As the new kids on the comedy block, it's giving rising comedians a unique chance to introduce themselves to a wider audience. You may need to know who Mike E. Winfield is now, because he has the potential to become a household name.

Winfield grew up in Maryland, and moved to California to "pursue comedy and to escape the rough streets of Baltimore," according to the bio on his website. He's had guest spots on late-night shows like The Late Show with David Letterman and he isn't new to streaming networks. He's also appeared on Brad Paisley’s Comedy Rodeo on Netflix. He's even received an Emmy nomination for Outstanding Guest Performer in a Digital Daytime Drama Series for his role as Jeremy in Conversations In L.A.

Winfield is definitely versatile. He plays Science in romantic crime drama Pimp, alongside Keke Palmer and DMX. But make no mistake, comedy is his specialty and you may know his face from his recurring role on The Office. Sadly, his character didn't have a name.

Winfield married an older woman with a son close to his age who he calls "stepman," hence the name of his special. His adventures being a younger husband and parent to someone close to his age are the main subject of his one-hour show. But what makes Winfield's comedy surprisingly relatable is his delivery. Watching his comedy is like hanging out with the friend who never stops making you laugh by pointing out the obvious things people don't say.

Winfield is also known for family-friendly material with about a PG-13 rating. As he said in an interview on Good Day in 2015 promoting a show for teenagers, "If you can't be funny clean, why are you doing it? 'Cause all we're doing is sharing a point-of-view. How you deliver it is your own taste." It's hard to argue with that.

Interviews with Winfield are rare, but it doesn't matter because his comedy is better on video than read in an article. I discovered this when I stumbled on a throwback video he shared on Instagram about quitting his job at a grocery store. I didn't grow up in a rough area and I've never worked at a grocery store, but I felt like I was right there with him as he described his experience.

Overall, Winfield's Instagram account is full of memes and commentary on pop culture. But it's clear he loves where he came from and has a deep appreciation for his childhood idols. One of his recent posts is an ode to Michael Jordan, the game of basketball, and the city of Baltimore at the same time.

He's definitely a fresh voice in comedy and I have a feeling the public will learn more about him from watching his comedy special than searching the internet. If you're as intrigued as I am, head over to Amazon.