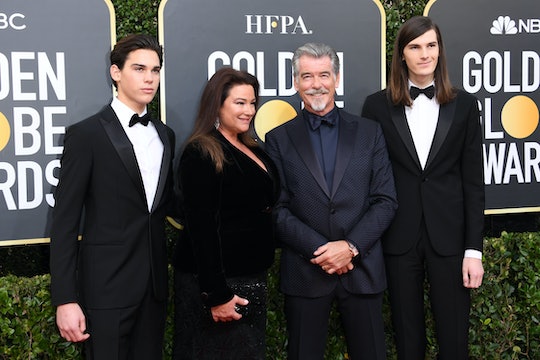 Who Is Miss Golden Globe 2020? Pierce Brosnan’s Sons Are The New Ambassadors

Miss Golden Globe is a tradition dating back to 1963 — and traditionally, it's an honor that's held by a celebrity's daughter. (Although not always.) The title was changed to "Golden Globe Ambassador" back in 2017 to better reflect the role and for the sake of inclusiveness. So who is 'Miss Golden Globe' 2020? It's actually a trick question, because Pierce Brosnan's sons (plural!) are the new ambassadors.

This year, Dylan and Paris Brosnan have the honor of serving as co-Golden Globe Ambassadors. They are just the fifth and sixth men to carry this honor, so, there's that. They're the youngest children (out of five) of Pierce Brosnan and Keely Shaye Smith, according to Vogue. And it looks like they're already following in their actor dad's footsteps. Dylan, 22, will graduate in the spring from the USC School of Cinematic Arts, and Paris, 18, is a freshman at the School of Film and Television at Loyola Marymount University.

"We’re proud to honor our dad’s legacy as we join the incredible roster of previous Golden Globe Ambassadors, many of whom have gone on to pursue their own dreams in the entertainment industry," Dylan said when it was announced he and his brother were the Golden Globe Ambassadors. "The biggest lesson our dad taught us is to ‘be kind,’ which was an essential factor in Paris and my decision to study filmmaking and our desire to tell important stories. Having this opportunity to turn the spotlight outward on kids experiencing hunger is a true privilege."

In addition to both brothers attending college for acting, they've already built pretty impressive resumes. Dylan is a singer in the band Raspberry Blonde, for example, as well as a model for Saint Laurent. Meanwhile, Paris is a bonafide filmmaker — having made a short film titled Your Voice Matters, which is about voter registration. Paris is also an accomplished model who has walked for Dolce & Gabbana, Balmain, and more.

So yeah. I have a feeling this isn't the last we'll be seeing of the Brosnan brothers. Whether it's in the modeling realm or the film industry, Dylan and Paris seem to have bright futures ahead of them. And having the honor of Golden Globe Ambassadors is sure to help them along the way.