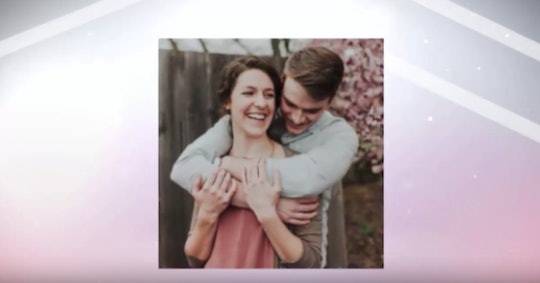 There is a new addition to the Little People, Big World family — and no, Audrey and Jeremy Roloff have not given birth (yet). Molly Roloff, the only daughter of Amy and Matt and sibling to the Roloff brothers just got married on Saturday. And if you're as invested in the Roloff family as I am (let's say, very invested) then you're probably wondering who Molly Roloff's husband is.

Before we can talk about Molly's husband, Joel Silvius, we need to talk about the gorgeous looking wedding, first. Molly and Joel married in an intimate ceremony at the Roloff Family Farm (where practically every important milestone takes place on Little People, Big World) surrounded by friends, family, and several of the family's beloved goats, according to People. Instagram photos from the wedding make the wedding out to be incredibly picturesque — and judging by Molly's statement to People, it was. "We feel blessed to have been able to celebrate our marriage surrounded by so many people we love," Molly told the magazine.

It's likely that this won't be the last that we will hear from Molly and Joel now that they're married. It is best that you become familiar with her husband before the show comes back on air this fall.

Molly tends to keep a low profile (and has appeared less frequently on the show, according to In Touch Weekly), choosing to keep her personal life private. And who could blame her? Especially since she practically grew up in front of cameras for TLC's audience. But, in spite of her public status, there is actually little information about her husband that is public.

The couple first got engaged in 2016, according to Us Weekly, and reportedly met while attending Whitworth University in Spokane, Washington, according to In Touch. The couple has reportedly been together for years, and continue to live in Spokane even after graduating from college. According to The Hollywood Gossip, Joel works as a reporting analyst in Spokane, while Molly is an accountant.

There is a lot of love for the couple in the Roloff family. Judging from the Roloff family's excitement about the wedding and engagement, it is clear that they really, really like Joel. But because Molly's Instagram profile is private, its hard to deduce much else about their relationship (other than the fact that they're so completely in love).

It is a little unclear how much of Molly and Joel's engagement will be airing on TLC. According to The Inquisitor, it is likely that some of the wedding might make it on the show, so fans should get really, really excited for it.

Molly's wedding looked absolutely beautiful and the newlyweds could not look any happier.