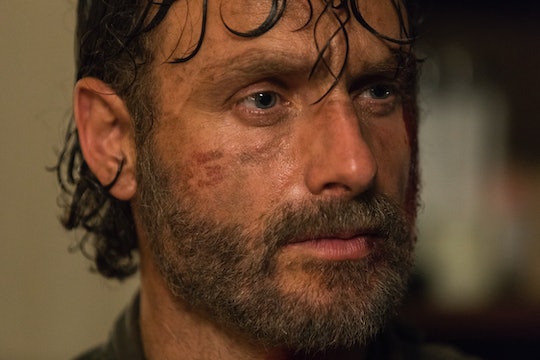 Someone Makes A Surprising Return On 'The Walking Dead'

In the interminable "The Damned," The Walking Dead brought back someone who some fans might have forgotten about, though Rick certainly hadn't. When a Savior caught Rick snooping and held him at gun point, Rick almost immediately knew the man's name: Morales. But who is Morales on The Walking Dead? If you're like me, then your first reaction might have been a totally blank "who?" Remembering who Morales is involves turning back the clock to Season 1, Episode 5 — long before the Saviors darkened anybody's doorstep on The Walking Dead.

Rick first crossed paths with Morales in Atlanta during the earliest days of the zombie outbreak. He was one of the people on Team Glenn who had ventured into the city to get supplies, conveniently arriving just in time to save Rick while they were at it. They all returned to the camp together, where Morales' wife Miranda and children Louis and Eliza were waiting. When everyone decided to book it to the CDC so they could try and get some answers about the outbreak, Morales and his family split from the group. They chose to head to Birmingham, Alabama instead, looking for other members of their family. That was it until Season 8.

The Morales of Season 8 certainly seems altered from the man viewers were first introduced to. While there wasn't much time to get to know him back in Season 1, he seemed like a good guy who was well liked by everyone. The departure of Morales and his family was a sad one for the other characters in the camp, and Rick even gifted Morales with a walkie talkie in case he ever wanted to join up again. Morales' daughter gave Sophia her doll. They were friends with Morales, even if his time on the show was short-lived.

It looked like Morales took a decidedly darker path in the intervening years. He has become a Savior, and a loyal one at that. He didn't appear to have any friendly feelings when he came upon Rick in another Savior's rooms. Instead of a warm welcome, Morales trained a gun on Rick and informed him that the other Saviors had been alerted to his presence. They were on their way. All the characters have been through so much over the course of seven seasons that it's no surprise to find Morales equally changed, though the fact that he is on the Saviors' side is still jarring.

Morales was only in the final moments of "The Damned," so there wasn't any time to answer the myriad questions his appearance inspired. Has he lost his family? Has he become a Savior to protect them? Another Savior in the episode told a lie about working for Negan to keep his family safe, but it was a believable story — could that be what happened to Morales? Dwight had started working for Negan to provide for his wife and sister-in-law before he became a true believer (and then defected all over again), so it wouldn't be out of the realm of possibility for Morales to have lived a similar story.

The next episode will presumably explore what happened to Morales in more depth, because The Walking Dead definitely didn't bring him back for no reason. He represents how different everyone has become due to the circumstances they've survived, but he could also have a role to play in the final battle between the Saviors and the Alexandria-Hilltop-Kingdom alliance. He could even prove to be a useful ally should Rick choose to try and win him over once again. But until the show provides those answers, Morales' journey from friend to foe remains a mystery.