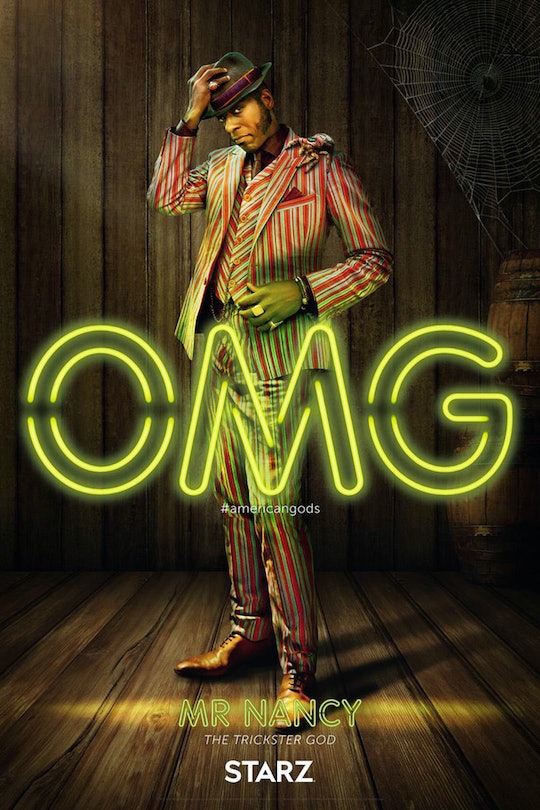 Mr. Nancy Is A Tricky Character On 'American Gods'

In the series premiere of American Gods, viewers met more than a few memorable characters. Among them were Mr. Wednesday (Ian McShane) and Bilquis (Yetide Badaki) two of the Old Gods juxtaposed against the newer, American-fashioned gods. But as anyone who read the book on which the show is based is well aware, there are plenty of other gods soon to come who will continue to spice up the story. One of the novel's most charismatic characters is Mr. Nancy, played by Orlando Jones on the new series. But who is Mr. Nancy on American Gods?

In the novel, Mr. Nancy is the Americanized name of Anansi, one of the Old Gods. Brought over from Africa, he is a trickster god. The book version of the character is described as an older man wearing dandy-ish clothing. By the look of Starz's previews of the character on the new series, it's clear that they kept the clothing but aged down Mr. Nancy in terms of his appearance, given Jones' age. Mr. Nancy is an important character in the book and appears fairly frequently during the latter half, but he's a more central figure in the American Gods spin-off book, 2005's Anansi Boys. The later novel (also an award-winner, because everything Neil Gaiman writes turns to award-winning gold, obviously) focuses on Mr. Nancy's kids.

Mr. Nancy is set to be introduced on the upcoming second episode of the eight-episode season, according to Inverse, in a cold open that shows his character's introduction to America. Much like the premiere's cold open showing how Odin wound up on the then-new country's not-so-fertile shores, Mr. Nancy's arrival isn't exactly wrapped up in sunshine and rainbows. In fact, he actually pops up on a slave ship and gives a show-stopping monologue. The monologue (previewed in a recently-released promo clip from Starz) even touches on Black Lives Matter and the centuries-long suffering of black men in America, up to the modern day.

One of the most interesting aspects of the character is his duplicity — something that will no doubt come up when Shadow meets him in modern day. "Mr. Nancy is a trickster god, he's a spider," Jones told TV Guide about his character. "He likes to use stories, he likes to use cunning. You never know if he's on your side or not quite on your side."

Ironically, though Jones is playing one of the Old Gods on the show, his casting on the series was all thanks to modern technology — Twitter, specifically. In an interview with Nerdist, Gaiman explained that he and showrunners Bryan Fuller and Michael Green had been ready to cast the role when Jones offered himself up as an option on social media. From there, he wound up being cast after a brief phone call.

Pretty great, huh? Oh the power of technology — for better or for worse. The next episode of American Gods airs on Sunday, May 7 at 9 p.m. ET on Starz.