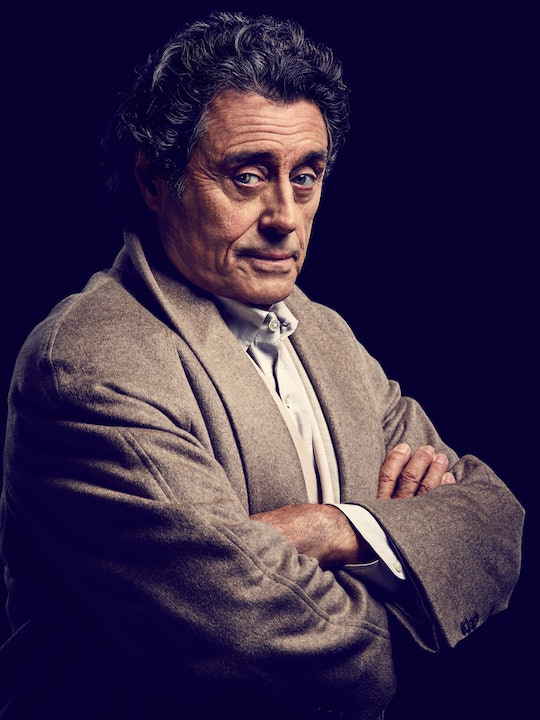 Mr. Wednesday Is A Powerful Force On 'American Gods'

The upcoming Starz series American Gods is one of the most highly anticipated new shows of the year, thanks to its impressive pedigree both on-screen and behind-the-scenes. The show's cast is filled with many familiar faces playing a variety of human, undead, and godly roles. Among them is Ian McShane playing Mr. Wednesday, one of the series' main characters and the man who effectively kickstarts the story. But who is Mr. Wednesday on American Gods?

American Gods is based on a novel of the same name by Neil Gaiman (who has also written numerous other beloved adapted stories, like Coraline and Stardust, and was created by Bryan Fuller (who also created Hannibal) and Michael Green (the screenwriter for Logan). Basically, there are a ton of supremely talented people behind this show, and it's got an equally talented cast.

The novel (and the show) follows the gradual build-up to an all-out battle between the "Old Gods" (gods from traditional mythology and various other cultures) and the "New Gods." Created by Gaiman for the purposes of his story, the "New Gods" include characters like Technical Boy (basically Twitter personified) and Media (played by the wonderful Gillian Anderson). The New Gods are worshipped far more by modern society, which has lost touch with its cultural history, and consequently most of the Old Gods have fallen to the wayside, forgotten, ignored, and virtually powerless.

McShane's character is on the side of the Old Gods and recruits the series' main character, Shadow Moon (played by Ricky Whittle) to help him recruit other Old Gods in his war against their usurpers. According to Starz's official character descriptions for the upcoming series: "Mr. Wednesday, a crafty and endlessly charismatic con man, is full of perverse wisdom, curious magic, and grand plans to unite the Old Gods in a battle for power against the New Gods."

If you've read Gaiman's book, you know exactly which Old God Mr. Wednesday is and why he chose that particular name. For those who prefer to be un-spoiled, I won't give that away.

McShane, who starred in Deadwood and also appeared in a brief but prominent Game of Thrones role last season, is a perfect fit for the shady grifter Wednesday. In the novel, Wednesday's mysterious intentions and his relationship with Shadow Moon comprise a lot of what makes the story so great and compelling. Seeing that character brought to life on screen is one of the main reasons I'm so excited for the upcoming premiere of American Gods on April 30.