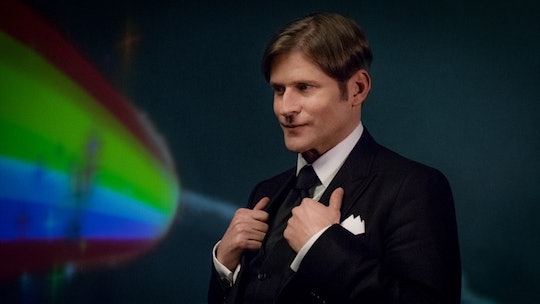 Starz is gearing up its star-studded adaptation of the Neil Gaiman novel American Gods, with Pushing Daisies and Dead Like Me alum Bryan Fuller at the helm for maximum dark whimsy. The cast includes Kristen Chenoweth, Gillian Anderson, Cloris Leachman as various Old and New Gods, while Crispin Glover, perhaps best remembered as Marty McFly's dad George in Back to the Future, tackles the role of Mr. World. Fans catch a glimpse of him in the trailer, just as Wednesday announces, "We’re at war already. And we're losing," but who is Mr. World on American Gods? In the rich cast of characters, he's one of the villains. Warning: book spoilers ahead!

American Gods tells the story of Shadow Moon, an ex-convict who, upon his release from prison, becomes the bodyguard of a mysterious figure named Mr. Wednesday. Bit by bit, it is revealed that the Old Gods (from various strains of mythology) still walk among mortals in America, but they can only survive based on the strength of mortals' belief in them. Wednesday is an incarnation of the Old God Odin, the All-Father from Norse mythology. Unfortunately for the Old Gods, there are stronger new American Gods, like Media, The Technical Boy (who serves as the personification of the internet), and The Intangibles (who serve as the personification of the stock market). Wednesday is trying to rally the Old Gods to form an army to fight the New Gods.

Mr. World is the leader of The Black Hats: basically, the "men in black" for the New Gods. They kidnap Shadow at one point, and although he escapes, Wednesday hides him from the New Gods in a small lakeside town in Wisconsin. The battle between the gods (both Old and New) eventually commences, and Shadow dies in the process. He is brought back to life eventually, but not before going on a journey through the afterlife.

On that journey, he learns that Mr. World is actually Low-key Lyesmith, who, yes, is an incarnation of that Loki from Norse mythology. (Low-key Lyesmith is also portrayed by a different actor on the show, Jonathan Tucker.) Shadow also learns that Odin and Loki have been working together on a two-man con to trigger the battle into taking place on purpose. The battle between the Old Gods and the New Gods would serve as a sacrifice to Odin, bringing him back to full power, while Loki could restore himself by feeding on the chaos. Eventually, Shadow communicates this to the other gods and convinces them to give up fighting.

It's a rich and complex story, with plenty of opportunities for mythology nerds to become engrossed in the subplots featuring recognizable characters. American Gods premieres on Sunday, April 30 at 9 p.m. ET on Starz.