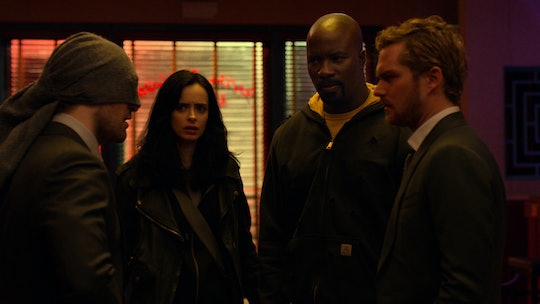 Another Member Of The Hand Is Revealed On ‘The Defenders’

Although The Defenders is bringing together a lot of fan favorites from all the Netflix Marvel shows thus far, it also includes some new characters. One of those newbies is a man called Murakami. But who is Murakami on The Defenders? He's not someone you want to mess with. (Warning: spoilers ahead for Episode 4 of The Defenders!)

Alexandra may be the leader of The Hand, but just like a real hand, there are actually five fingers to the organization who run things. Those five include Alexandra, Madame Gao, Bakuto (who was allegedly killed in Iron Fist), Sowande aka the White Hat man, and Murakami. According to Stick, these five once lived in the mystical land of K'un Lun, where Danny Rand became the Iron Fist. However, while the other monks wanted to study Chi to learn about healing, the five wanted more.

They hoped to gain immortality and when the other monks learned what they truly desired, the five were banished from K'un Lun, similar to how Lucifer was cast out of Heaven. The five then became The Hand, and despite being kicked out, it appears they learned how to gain immortality anyway. It's unclear how exactly they've been able to stay alive this long, but they've managed to do so for centuries. Until now.

Now that Alexandra appears to be dying from a mysterious illness, it's clear whatever power kept them all alive is no longer working. Hence, why Alexandra is in such a hurry to put her plans into motion and why she went to Murakami for help.

According to Stick, Murakami is the most antisocial of the five fingers. He typically keeps to himself, however, when he does come out to play, everyone should make themselves scarce. Though he hasn't yet demonstrated what exactly makes him so terrifying, it doesn't seem to bode well that he was hands deep in a dead bear during his first appearance on the show. He also made it clear that Alexandra almost never gets her own hands dirty, seemingly implying that, he and the other fingers, are the ones to do so.

Though he seemed reluctant, by the end of his conversation with Alexandra, it appears Murakami will be making his way to New York City to join the fight and assist with whatever The Hand's plans are. If Murakami does show, this will make things even more difficult for the Defenders, who are already struggling to face off against Elektra, aka the Black Sky. Hopefully, they'll be able to take on whatever The Hand throws at them next.