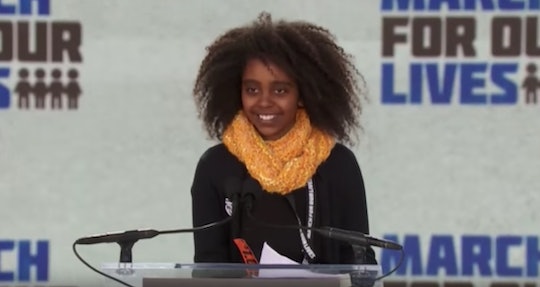 This Saturday, the March For Our Lives events in Washington, D.C. and across the globe dominated the media. For many, it was a further introduction to the power of youth organizing, and an uncomfortable reminder that no event can unfold in this country or beyond without young eyes watching. But it was a speech demanding recognition for African American girls that caught the attention of the public and now everyone wants to know: who is Naomi Wadler?

Only 11 years old, Wadler was selected to speak in Washington, D.C. (where crowds reached about 800,000) after organizing a walk-out at her school in Alexandria, Virginia, according to The Independent. Although the walk-out was in honor of the victims of the Stoneman Douglas High School shooting, with a minute of silence for each of the 17 victims, the young organizers added another minute in honor of Courtlin Arrington. Only a senior in high school, Arrington was killed after being shot inside of her Alabama high school, as Newsweek reported.

Arrington wasn't the only name Wadler shouted out in her speech, though. In addition to the 17-year-old, Walder highlighted Hadiya Pendleton, a 15-year-old Chicago girl who was shot in the back and killed, as ABC News reported, along with Tianna Thompson, a 16-year-old who was shot in the head and killed in Washington, D.C., according to WTOP.

In her speech, Wadler went on to say:

Throughout the demonstrations following the Parkland shooting around gun violence, Black youth activists involved in organizing around Black Lives Matter and other movements pointed out on Twitter: where the Parkland teenagers were receiving support, they had faced backlash, threats, and government surveillance.

Recently, the Peace Warriors, a group of predominantly Black students from Chicago, met with Parkland students. For 10 years, the Peace Warriors had been organizing around gun violence without garnering national media attention, while Parkland students were able to feature on the cover of TIME. In the meeting, senior Sarah Chadwick voiced what was a major factor in the difference between media perceptions: “I acknowledge my white privilege.”

Later, Chadwick told TIME, “I said it because it’s true. White privilege does exist and a lot of us have it. If we could use our white privilege to amplify the voices of minorities, then we’re going to use it. The more we ignore it, the worse it gets.”

Recently, attention has also shifted to another group from Chicago, Ujimaa Medics (UMedics). The program is dedicated to allowing families to take more control over their surroundings, by equipping youth in particular with the ability to treat gunshot wounds, handle a scene, and talk to police. “When everyone else was saying how can we get out of the hood, we are the people who said we wanted to stay and just make it better,” UMedics’ website reads.

Their training involves taking into account the perception that will be read onto Black children at a police scene. According to Trace, it’s part of the reason why talking to police is incorporated into the training.

“It’s traumatic because they shoot people,” Kenisha Jamison, mother of a youth in UMedic’s program, told The Trace. “And this is what I train people on, you are in the most dangerous situation because of the police.”

Wadler’s speech demanding recognition for Black girls was a direct confrontation to public perception that either cast Black girls as criminals in their own story, or ignored them all together. Although Wadler critiqued reducing Black girls to only statistics, the irony is also that Black girls can rarely make it to that point. Statistics around race largely ignore the nuances of Black girlhood, playing into how Black girls’ narratives are erased.

Wadler is young, but she follows a long tradition of youth activism within oppressed communities. During the Civil Rights Movement, children as young as 4 years old were involved in the Children’s March in Birmingham, Alabama, where many spent days in jail.

Towards the end of her speech, Wadler spoke to accusations of being only a puppet for adults, but the reality is that Black children, Black girls in particular, are well aware of the world around them. They know how to process, and understand, it. They have to, after all, if they want to make it to 18.

More Like This
Teacher Shot By 6-Year-Old Student Told School He Had A Gun, Was Told To "Wait"
Florida Teachers With “Unvetted” Classroom Books Could Face Felony Charges
The President Of Ireland Wants To Get Rid Of Homework & Honestly, He's Onto Something
Jacinda Ardern No Longer Has “Enough In The Tank” & Moms Know Exactly What She Means