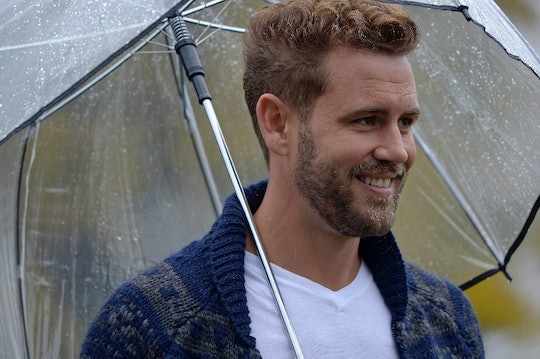 Somehow, we've reached the season finale of The Bachelor. It's down to Raven and Vanessa, and Nick took them to meet his family prior to making his decision. The Vialls have been along this journey with Nick throughout his time on the show (and The Bachelorette... twice... and Bachelor in Paradise), so they have strong feelings about who he ends up with. His father, Christopher, was in the spotlight for some part of the finale. Who is Nick's dad on The Bachelor? Fans on Twitter can't seem to get enough — and neither can we.

We know that Nick is close with his family, and it's easy to see why. First off, his immediate family is huge — with five sisters and four brothers according to Life and Style. In a profile he wrote for People in January, Nick said he hasn't lived in Wisconsin for a decade but "it’ll always feel like home" to him. "My family has always been my biggest support," he continued.

During Nick's visit to Wisconsin this season, we saw that being a part of Bachelor Nation has taken a toll on Nick's parents. His mom, Mary, became pretty emotional. "I know she just wants the best for me," Nick told People, "and hopes that I find that lasting love." He then said that his parents were his biggest role models and that if he found a love like theirs, "I’d be the luckiest man in the world."

On Monday's finale, it was his dad, Chris's, turn to become emotional. When talking to Vanessa about what makes a lasting relationship, he couldn't help but break down. It was evident that he cares about who Nick ends up with, and wants both he and his future wife to be happy. It was so cute to watch, we found ourselves falling a bit for Chris Viall — and social media did, too:

Who is Chris Viall, besides from a Wisconsin man with the same proclivity for tears as his son? According to Earn the Necklace, he's 60 years old and works for Rise Graphics Ltd. He frequents Nick's Instagram account, too:

Throughout Nick's journey in Bachelor Nation, his dad — and mom, and siblings — were there by his side. On Monday night's finale, we saw how much he was affected by Nick's quest for love. Hopefully after tonight he won't be worried anymore, and will be happy with whom Nick ends up with.