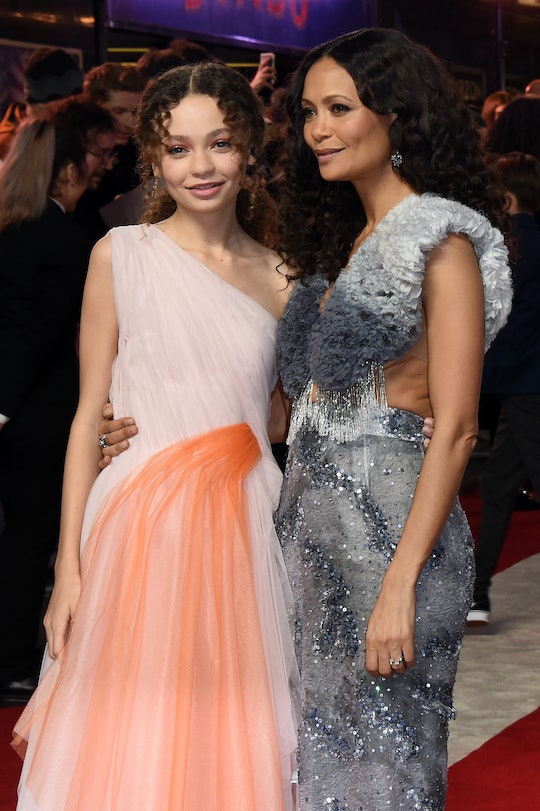 When the cast of Disney's new live-action movie Dumbo made the press rounds leading up to the film's premiere, there might have been one face that looked really familiar, but you couldn't quite place. So if you were wondering who Nico Parker is, she's Thandie Newton's daughter. The 14-year-old actress is the young star of the new Dumbo and she is definitely her mother's twin.

Parker is the daughter of Newton and her husband, director Ol Parker, according to the Daily Mail. Dumbo is the young actress' first movie, though she’s grown up around the industry. Humorously, she told The Hollywood Reporter that having her mom give her acting advice “is a bit stressful... because I don’t know if you know she is better than I am.” Sounds like a teenager for sure.

But Parker can’t escape one thing about her close relationship with her mom — and that's their strong resemblance. They both have the same large eyes and stunning charming face. They even twinned it up on the red carpet for Dumbo is complementary velvet dresses, according to Vogue. It was a big night for Parker, who was celebrating her acting debut; Dumbo is her first role on the big screen, after all, but she does also have IMDb credits (as herself) for The Late Show With Stephen Colbert and Disney Parks Magical Christmas Day Parade.

On Colbert’s show, Parker revealed that her favorite thing afforded by her parent’s celebrity status is the opportunity to meet “some cool people.”

For example, as she told Colbert earlier this month, when she was young her family stayed at Oprah’s house once, which led her to believe that the host/author/all-around-boss lady was, in fact, the queen of the world. “Well you’re English, you have a queen,” Colbert pointed out gracefully.

In an interview with Teen Vogue, Parker also said that until she grew older, she never really understood how great her parents’ jobs were (her dad is a director of iconic movies like Mamma Mia! Here We Go Again, according to Variety.).

"I just remember complaining because I didn't know how actually cool it was," she told Teen Vogue. And now that the tables have turned and she is the one in the spotlight, it’s all a bit confusing, as she told the magazine: “The whole process of publicity, I find it really odd. I’m not here to be like their kid. [My mom is] here to be my stage mom.”

Parker’s life off the set is relatively normal still, as she told Teen Vogue. For example, she still chooses to attend school in London, according to the Daily Mail.

For her first film experience, 14-year-old Parker was able to learn from some of the best in the business. Dumbo is directed by Tim Burton and stars Colin Farrell, Danny DeVito, and Michael Keaton, among others. It’s a reimagining of the classic story, which sees Parker’s character Milly coming alongside Dumbo as he learns to channel his ability to fly. Milly, her father (played by Farrell), and brother (played by Finley Hobbins) are there to protect the young elephant from an unscrupulous entrepreneur who seeks to take advantage of him.

The movie looks fantastic, and Parker’s turn in it a worthy debut. Check it out in theaters on March 29.