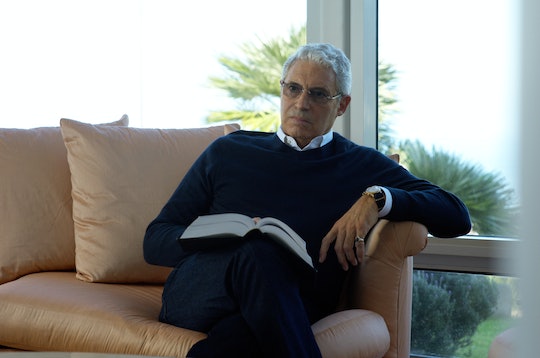 Since its first episode, The Assassination of Gianni Versace has moved backwards in time from Andrew Cunanan's most famous crime (the murder of the title) to his less well-known but equally horrifying killings. Episode 6 will push further into the past as it explores Andrew's life before his murder spree began, including his relationship with Norman Blachford. But who is Norman Blachford on Versace?

Played on the show by Michael Nouri, Blachford was an older, wealthy businessman with whom Cunanan had a brief relationship. In the middle of the manhunt for Cunanan (but before he shot Versace), the San Diego Reader did a profile on his life, which included some information about Blachford. The article explained that Blachford had previously owned "a firm that made sound insulation for use in automobiles," which presumably helped him accumulate his impressive fortune. He was retired and in his 60s by the time he became involved with Cunanan, who was 26. A year after they met, Cunanan had moved into Blachford's La Jolla condo and he was relying on Blachford's money to keep him living comfortably.

A friend of Cunanan's named Robbins Thompson is quoted in Maureen Orth's book Vulgar Favors (on which this season of American Crime Story is based) as saying:

They both knew what they were getting into. This is not a situation of an older guy taking advantage of a younger guy. If anything, it was the other way around.

It seemed like a pretty good deal for Cunanan, at least at first. In the Vanity Fair piece that would later become her book, Orth reported that Blachford gave Cunanan a monthly allowance of $2.5k, as well as a 1996 Infiniti I30T. They went on trips to Europe together, and Blachford later sold his home in Phoenix at Cunanan's urging to live full-time in La Jolla. According to Thompson, there was affection between Cunanan and Blachford but both were aware that their arrangement was financial in nature.

In addition to funding the lavish lifestyle Cunanan was after, Blachford also afforded him access to a wealthier strata of society. Blachford was a member of a very private fraternity called Gamma Mu that had luxurious bi-annual getaways. Through him, Cunanan briefly became a member as well, though it's unclear whether the true nature of their relationship was common knowledge. Though Orth claimed that many of the men involved in Gamma Nu were gay, the head of the San Diego chapter, Art Huskey, said, "We always assumed Andrew was hired to be Mr. Blachford's decorator."

While living with Blachford, Cunanan was also maintaining a long distance relationship with David Madson, the man who would become his second victim. It doesn't seem as though Blachford knew about this, especially because Vulgar Favors made it sound like Cunanan was keeping the areas of his life very much separated from one another. For example, Blachford was reportedly under the impression that Cunanan's repeated trips to San Francisco were to visit an ex-wife and young daughter he did not actually have.

Cunanan and Blachford's relationship did not last long. Orth's book leaves the reader with the impression that Cunanan thought Blachford should be a great deal more generous than he already was, and this contributed to the their break-up in September 1996 after a year together. Blachford gave Cunanan $15k as palimony and jaunted off on a vacation, while Cunanan moved in with two friends.

Cunanan's time with Blachford is important when it comes to understanding Cunanan's personality and how he treated people. In the context of Versace, it gives viewers some insight into how Cunanan was living in the years before the murders began, and just how low his subsequent downward spiral took him.