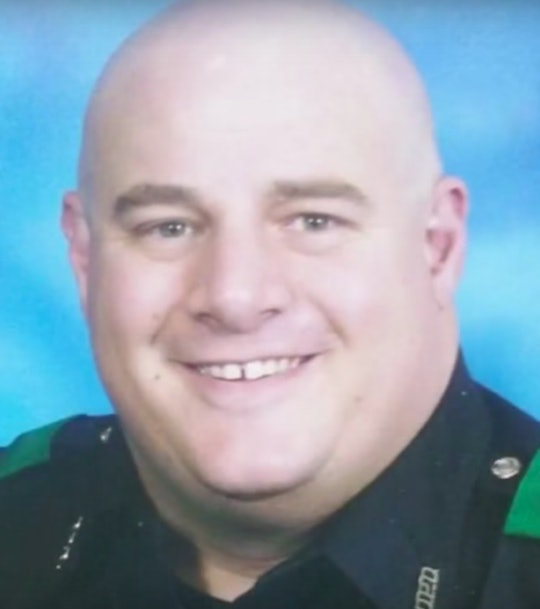 Who Is Officer Lorne Ahrens? The 'Fearless' Dallas Cop Died In The Tragic Sniper Ambush

One evening last week, a Dallas police officer provided dinner for a homeless man and his dog, as he routinely did. The next day, he died after a sniper shot 12 officers at an otherwise peaceful protest over the police shooting deaths of two black men in separate instances elsewhere in the United States. Five of the 12 officers were killed. Family members and fellow law enforcement officials have since been left reeling, remembering who Officer Lorne Ahrens was using descriptors like "big teddy bear," and "jokester," all disbelieving that the 48-year-old who had worked for the Dallas Police Department for 14 years could have died this way.

William Ahrens described his son as a "rough and tough," "fearless," guy who'd "get in the middle of fisticuffs with no hesitation," in a Skype interview with CBS News. At the same time, he was a loving father and family man who would just as readily have tea with his daughter and visit his kids' school in uniform to talk about his job. He was married to another police officer on the same force, The Dallas Morning News reported, and the couple's two children, 10-year-old Sorcha and 8-year-old Magnus, woke up Friday morning to learn that their father had died.

While Ahrens's family grieves, so do his coworkers, current and former. Law enforcement agencies nationwide plunged into mourning following the ambush, which was the deadliest single incident for law enforcement since 9/11. They're dealing with what that means generally, but those who knew them are also remembering the individuals who died in the line of duty. Sgt. Anthony Gunn of the Los Angeles County Sheriff's Department, who worked there with Ahrens, a native Californian, throughout the 1990s, remembered him fondly, according to CNN:

He was the kind of guy that it made you happy when you got to work and saw he would be working the shift with you. You could count on him to do the right thing, the right way. He was a dedicated professional. He was well-grounded, seeing the world the way it really, is but not letting the evil in the world discourage him from doing good.

Ahrens had made it through one surgery when his wife, Katrina Ahrens — who had been resting up for her own 3 a.m. shift when she got the news of the shooting — arrived at the hospital, The Washington Post reported. There, she learned that something had gone wrong. The 6-foot-5, former semi-pro football player ultimately did not survive the injuries he sustained from the bullets that had penetrated his liver.

"He was always one of the happy ones, with a smile on his face," Dallas patrol officer Steven Stribley told The Dallas Morning News. This was a man who would crouch down to kids' levels when he spent time with them, and also the valiant officer with the tattooed arms who in 2003 chased and tackled a cocaine dealer who had fled a drug bust and tackled him.

Before starting his career as a police officer in Dallas in January 2002, Ahrens was a law enforcement technician in Los Angeles from 1991 to 2002, according to CBS News. Throughout that time until his death, by all accounts, he represented the best of law enforcement until his death protecting people's right to express their grievances with some who had done the job less admirably. His loss is emblematic of the depravity of the attack in Dallas last week, and yet another reminder of the need for more understanding and love.