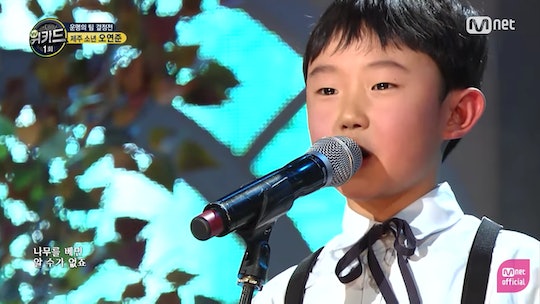 Who Is Oh Yeon Joon? His Performance Of The Olympic Anthem Was Heavenly

The past two weeks of the 2018 PyeongChang Winter Olympics have been filled with highs and lows for Team USA. But it has been amazing watching the best of the best compete with athletes from across the world. Now that the Olympic events have officially come to an end, the only order of business left is the closing ceremony, which aired live at 6 a.m. Eastern Time Sunday. And much like the games themselves, the closing ceremony didn't disappoint with its lineup of talented performers. But who is Oh Yeon Joon? The little boy who sang while the Olympic flag was being lowered sang like an angel, that's for sure.

From the moment the young performer opened his mouth during the Olympic Anthem, viewers were blown away by his smooth, angelic tone. As it turns out, the singer is an 11-year-old boy named Oh Yeon Joon. And he's kind of a big deal in South Korea. He first went viral back in 2016 with a performance of "Colors of the Wind" from Pocahontas on the show We Kid, reported Allkpop.com. Keep in mind as you watch his amazing rendition of the iconic song, below, that Oh Yeon Joon was actually suffering from vocal cord nodules at the time. Yet somehow, the then-9-year-old still managed to bring judges to tears.

And in the video below, Oh Yeon Joon — who earned the nickname Jeju Boy — is performing "Spring in My Hometown" on We Kid. Phenomenal.

The voice of an angel. It sounds cliche, right? But that's the phrase that comes to mind over and over again as I listen to this talented young man. And when it came to singing the Olympic anthem during the closing ceremonies, viewers who had no idea who he was couldn't have agreed more. "What a beautiful voice - the 11year old boy singing the Olympic Anthem!! BRAVO!!," one Twitter user wrote.

At the time, another person tweeted, "The young singer who sang the Olympic anthem was wonderful. Such a powerful voice and so confident!"

Still others were skeptical of Oh Yeon Joon, with many wondering if pitch-perfect performer was auto-tuned — or even lip syncing. Or possibly, both. "Kid performing the Olympic Anthem sounds autotuned to me," one person tweeted. Other Twitter user called as they heard it, "Playback and autotune for the Olympic Anthem."

Guys, I hate to break it to you, but I'm not 100-percent convinced there was any auto-tuning or lip syncing going on. Because this kid is legit that good. Plenty of Twitter users instantly recognized Oh Yeon Joon from his We Kid days. And well, they were excited to say the least. "OH MY GOD, MY CHILD OH YEON JOON!!!!!!" one person Tweeted. (Note the all-caps and six exclamation points.) Another Twitter user wrote, "Yeon Joon was one of the contestant[s] in Mnet's WKIDS! Watch this video of him singing that literally made me cry."

For the record, Oh Yeon Joon wasn't the only young performer who was featured during the 2018 PyeongChang Winter Olympic closing ceremony. At the beginning of the ceremony, 13-year-old Yang Tae Hwan tore up the stage on guitar with is performance of "Winter" Vivaldi's "The Four Seasons," BuzzFeed reported. Clearly, South Korea has some seriously talented young people.

In case you didn't catch Oh Yeon Joon or Yang Tae Hwan live, (Because let's face it, how many Americans are awake that early on a Sunday morning?) never fear. You'll have another chance to see the talented young performers on the primetime showing of the opening ceremonies. You can catch the entire event at 8 p.m. Eastern Time on NBC. Trust me, it's not something you want to miss.