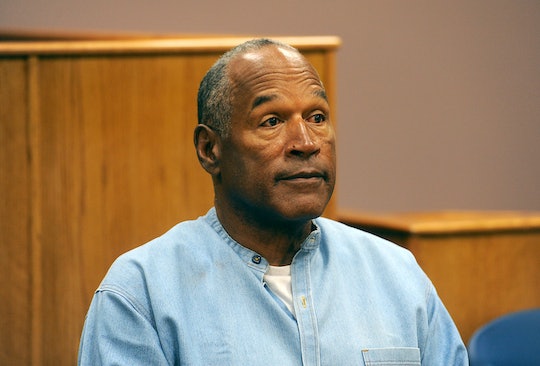 Who Is OJ Simpson Dating Now?

O.J. Simpson, former football star and epicenter of the murder trial that was frequently referred to as "the trial of the century," in the '90s, could be released as soon as October — and the public is wondering what's in store for Simpson once he's out from behind bars. His children have spoken out in support of their father, but people are wondering if anyone else is anxiously waiting for Simpson to be released (other than a plethora of journalists, of course). In other words, who is O.J. Simpson dating now?

Simpson has been in jail for a long nine years now, thanks to the part he played in an armed robbery in Las Vegas in 2007, and no news has emerged of him dating anyone. When he spoke to his parole board earlier this week, the 70-year-old mostly stressed his desire to spend time with his children.

"I would just like to get back to my family and friends, and believe it or not, I do have some real friends," he said, according to CNN. "I've done my time."

The last woman to date Simpson before he was imprisoned was Christie Prody, a waitress who dated him for 13 years after he was acquitted of Nicole Brown Simpson and Ron Goldman's murders. Prody stood by Simpson during his trial for armed robbery, but the two eventually split. In 2009, a year after Simpson was imprisoned, Prody told ABC News that "everything" was different and that she was seeing a new partner and had a new baby.

According to The Miami Herald, Simpson is likely to return to Florida once he is released, where he lived prior to his imprisonment. And while he may end up striking up a romance with someone once he's back, most believe that he will continue dealing with the public fallout of the murder trial for the rest of his days. His friends, however, believe he'll go back to living a normal life once he's out of prison.

"He’ll be OK," Tom Scotto, a friend of Simpson's, told USA Today recently. "He just needs to adjust. Ten years is a long time to be away."

According to NBC News, Simpson also said that he wasn't too worried about adapting to life outside of prison. "Well, I've been recognized since I was 19 years old," he told the parole board. "Rarely have I ever had any person give me any negative stuff in the street ... and I don't foresee any problem dealing with the public now at all."

Whether Simpson's adjustment to life as a free man will include new romantic connections or not, however, remains to be seen.

More Like This
The Reason You Fantasize About Other People When You’re Married
Pinterest Predicts Their Top 2023 Trends In Parenting, Beauty, Fashion, Home, & More
Meghan Markle Recreated One Of Her Wedding Looks In NYC With Princess Diana’s Ring
Lizzo's Mom Gushes About Her Daughter As A “Champion Of Others” Who “Builds You Up”