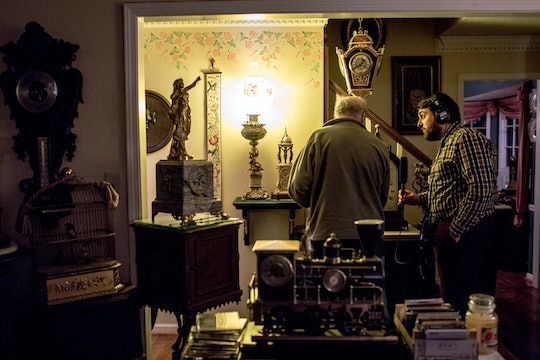 S-Town, the brilliant new podcast from the teams behind Serial and This American Life, sets out to tell the story of an alleged murder in "Sh*ttown," Alabama and morphs into a devastating mystery that becomes more and more compelling (and confusing) with every episode. Host Brian Reed travels to Alabama to meet with John B. McLemore, and in "Chapter VI," we learn about a man named Olin Long. But who is Olin on S-Town? And why is his relationship with McLemore so important to the rest of the season? (If you don't like spoilers, stop reading right now because spoilers for Season 1 of S-Town are everywhere below!)

If you've made it past "Chapter II," then I'm not spoiling anything that you don't already know. Following McLemore's suicide, the story of S-Town delves way beyond an alleged Alabama murder (which, for the record, turns out not to be true). In the quest to better understand who McLemore really was, a man named Olin Long reaches out to Reed to tell the story of a man few people had the true pleasure of fully knowing.

On the night of his own wedding in October 2015, an email showed up in Reed's inbox from a friend of McLemore who had only recently heard about his death and the S-Town project and was interested in listening when it aired. The email, from Long, said that he and McLemore had been friends for 12 years. But since Long's name hadn't been left behind on McLemore's contact list, Reed's interest had piqued. Who was he? And why was he coming forward now?

When Reed and Long meet, we learn that Long was a linguist in the Air Force with top-secret security clearance, specializing in German and Russian. He told Reed, "What I did was just listen to Russian pilots talk and send it to the National Security Agency." These days, he's a registered nurse at a local, nearby hospital outside of Birmingham, Alabama, working out of the surgical intensive care unit. Before Long and McLemore ever met in real life, they talked on the phone regularly for 15 months. Long says that the twosome met on a singles' line for men and that, Long said, was the "only good thing to come out of that line experience was a friendship with John." Summing up everything audiences have come to believe about McLemore in just eight words, Long told Reed that when McLemore called him back: "I knew I was talking to someone brilliant."

Though the men hadn't been in touch for about a year before McLemore's death, Long said to Reed that he's since visited his friend's grave, been writing in his journal about him, and even corresponding with other commenters on McLemore's obituary page.

Long says their unique friendship developed over the 15 months they spent talking on the phone, often late at night since Long worked nightshift hours in Birmingham. The two talked about the things central to their lives — books, music, things going on in the world, growing up, and, as Reed said, "a lot about being gay men living in Alabama." Long told Reed that he and McLemore shared an "intimacy" in their relationship — an intimacy Long's counselor defined as:

Intimacy is the feeling that I can tell another person my thoughts and my behaviors without fear of judgment. If I can tell them the things that I've done — even the things I'm not proud of — and they're still gonna answer the phone and say, 'Hey Olin, how you gettin' along?' — that's how John would do, say, 'How you gettin' along?' So we did have a close friendship there.

It's clear that the two shared a deep respect for each other even if they did have a falling out later on in their relationship. As Long defined so obviously, he and McLemore shared the most sacred piece of a relationship — platonic, romantic, or otherwise: an openness to share the intimate details of their life with another person. And isn't that the hope we all have with every new connection we make?