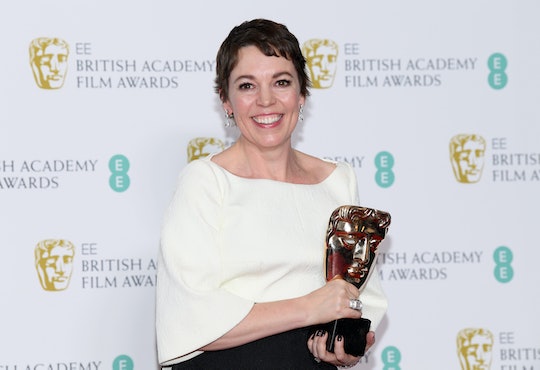 Olivia Colman & Her Hubby Are The *Cutest* Couple

Whenever there is a new royal in town, everyone wants to know about their love life — naturally. Netflix cast a new Queen Elizabeth for The Crown Season 3 (currently in production), the same actress who is Oscar nominated for her role as another queen in The Favorite. Fans watching for Olivia Colman on the Oscars red carpet may be wondering who Olivia Colman's husband Ed Sinclair is.

Even though she's pretty much bonafide Hollywood royalty by now, winning a Golden Globe and a BAFTA for playing Queen Anne — unlike real-life royalty, Colman has successfully kept her private life private.

I'm amused by how incredibly un-royal (in the best way) and down to earth she seems to be off screen. She thanked her "bitches," referring to co-stars Emma Stone and Rachel Weisz, in her Golden Globes acceptance speech and also didn't forget to mention the sandwiches. So if you guessed her husband Sinclair is pretty cool, you'd be right.

He is currently a screenwriter, though it seems he did try his hand at acting for a bit. Sinclair has one listing on his IMDb page to show for it. But he also has some impressive educational achievements to his name, having studied law at Cambridge University, acting at Bristol Old Vic Theater, and even teaching adult literacy at Southwark College in London.

He's also been a waiter, an office temp, the owner of a karaoke venue, a short film producer and a cooperate role-player (whatever that is) when he's not being the "general fort-holder at home for his growing family," he also writes, according to his Curtis Brown biography.

Sinclair writes short film scripts, short stories, and a poem here or there to go along with his two unpublished novels.

So, what doesn't the Native New Zealander do? According to his wife, he doesn't pay too much attention to her face. Colman is not shy about the fact that she gets botox, and she recalled for The Times UK, "I didn't tell my husband and then for about six months he kept saying, 'Hello, pretty!' and then I told him and he found it hilarious."

Colman is pretty proud to have Sinclair on her arm. "But, you know, Ed and I are the wind beneath each other’s wings. Neither of us would be any good without the other," she says in an interview with The Daily Mail.

They seem to be pretty amazing individuals on their own, and quite the power couple together. Of course Sinclair joins in Colman's celebrations during awards season.

In what seems to be her signature awards speech style Coleman said to her costars at the BAFTAS during her Best Leading Actress acceptance speech, "We're having an amazing night, aren't we? We're going to get so pissed later." Of course, Sinclair was by her side that night. The couple that parties together stays together, am I right?

In that same speech she offered to scratch the names of her costars into her award. "This is not for the lead it's for a lead," she said. "As far as I'm concerned all three of us are the same and should be the lead and it's weird that we can't do that."

That's some girl power I can get behind. I now have even more reasons to watch the Oscars. Plus, a movie written by Sinclair and starring Colmen is one I'd love to see.