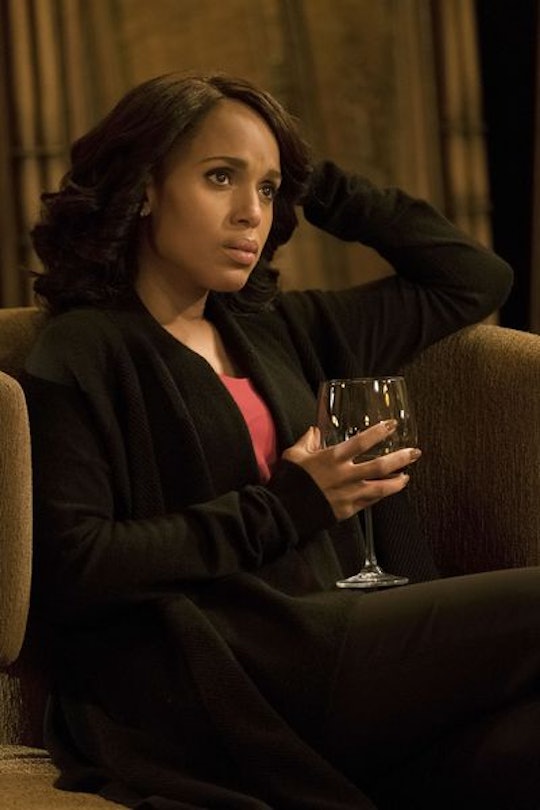 Olivia Is Tying The Knot On 'Scandal'

Scandal fans are still recovering from last week's Huck-centric episode, but it looks like they may receive a reprieve. This week is the 100th episode of the series and the show is taking fans back in time to when Olivia, Mellie, and Cyrus decided to rig the election so Fitz could win the presidency. The new episode questions what would've happened if Olivia hadn't gone along with the plan. Well, apparently she'd be getting ready to walk down the aisle. So who is Olivia marrying on Scandal? There's really only one acceptable answer.

From the very beginning there has been one relationship that has been the focus of the show. Olivia and Fitz have gone through a lot of ups and downs throughout the years, and lately fans have felt deprived of their Olitz fix. They practically lost it when Fitz recently mentioned Vermont again a few episode ago and then totally lost it when Fitz and Olivia hugged it out last week. That Olitz music has been seriously missed. So what better way to give the fans what they've practically been begging for than to present an alternate reality in which Olivia and Fitz actually get married and have their happily ever after that they dreamt about for so long?

Fans almost got an Olivia and Fitz wedding when they were going to get married in the White House so Olivia couldn't testify against Fitz. But Mellie swooped in to prevent that from happening, and honestly, I'm kind of grateful. Who doesn't love the Mellie and Olivia team up these days? Still, a grand wedding between Olivia and Fitz? That's something I would love to see play out and this episode is the perfect opportunity to make it happen — even if it's only temporary.

And I mean, who else but Fitz would Olivia be marrying? Well, unfortunately, there are actually a few options. Though fans may have forgotten, there was a time when Olivia was actually engaged to Edison and then they dated again briefly later on as well. If Olivia didn't agree to rigging the election, Fitz would've never been president. And while, sure, he could've left Mellie and began a relationship with Olivia — but there's also a chance that Olivia would've ran off feeling like a failure and back into the arms of Edison.

Alternatively, Olivia and Fitz could've not ended up together for some other reason, so that when she met Jake (thanks to her father), Fitz wasn't even an issue and she ended up falling for him without the dramatic love triangle. So maybe it's Jake waiting for Olivia at the altar. However, if that's the case Olitiz fans may just riot.

Honestly though, if Olivia was to marry anyone, it will probably end up being Fitz. The only thing that always got in the way of Olivia and Fitz being together was the presidency. Without it, there's nothing standing in the way of their romance.

You can see who Olivia marries in the alternate reality episode of Scandal, airing on Thursday at 9 p.m. ET on ABC.