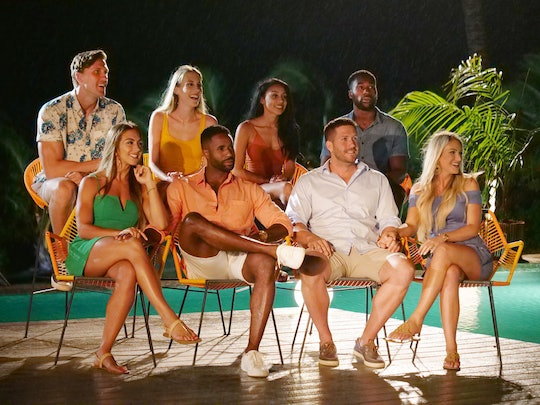 Here's Everything To Know About The 'Temptation Island' Couples

After a wildly successful (and controversy-riddled) first season in 2001, Fox's Temptation Island suffered disappointing ratings in Seasons 2 and 3, leading to an eventual cancelation in 2003. But it's a new era with a whole new bevy of temptations, thanks to social media, so USA Network revived the almost two-decades-old show for a reboot. And viewers are probably dying to know: who's on the Temptation Island cast? Presumably, the series has learned from its mistakes and performed more thorough background checks on its couples this go-round. (One Temptation Island Season 1 couple famously got kicked off the show after production learned that they actually had kids together.)

The reboot's couples have pretty diverse relationships, from high school sweethearts, to on-again-off-again lovers, to a couple who met at the gym. But the one thing they all have in common is that they're at a ~crossroads~ in their relationship. Basically, they're all at the point where they want to commit to each other fully, but something is holding each of them back. Temptation Island takes them to Maui, where they get split up and placed in separate digs with 24 single men and women who also happen to be looking for love. Here's more on the couples trying to test their commitment.