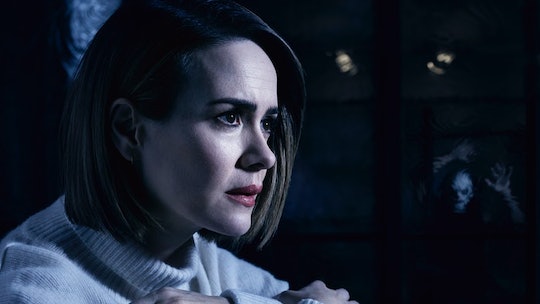 Ozzy's Father May Be Hiding In Plain Sight On 'AHS: Cult'

I'm consistently impressed by dedicated American Horror Story fans. They always seem one step ahead of the show (and, like, five steps ahead of me). For example, some viewers accurately predicted that Ally's wife, Ivy, was a part of Kai's cult. I've seen that theory floating around since the premiere, and the reveal was in Episode 5. Another question some fans are eager to see answered is the identity of Ozzy's father. Ozzy is the son of Ally and Ivy, and even he doesn't know who his biological parents are. So who is Ozzy's father on AHS: Cult? Dedicated viewers have some ideas.

The question of Ozzy's father first came up in the premiere, "Election Night." Winter, his new nanny, asked him about his parents. Ozzy said he wasn't sure who his parents were — mother or father. It's implied that either Ally or Ivy carried him, but that's not confirmed either. I and other observant viewers knew then that the topic is of importance, as AHS characters don't ask questions if the answers aren't important to the plot. Since then, the internet has been wondering who Ozzy's father could be — and if it could be tied to the fact that Kai seems obsessed with his mother, Ally.

The most prominent theory seems to be that Kai is Ozzy's biological father. This would explain why Kai is preoccupied with Ally, and TVGuide pointed out that Ozzy looks a bit like a young Evan Peters (I see it — it's the hair). Reddit user Anon33157 took the analysis a bit further, though. They suspect that the cult is after Ally because of Oz. He may be more than just her son; he could be the next cult leader, or the person Kai needs to secure the country's destruction. Anon33157 suspects that Oz's full name, "Ozymandius," is tied to this. The name is the title of a poem by Percy Bysse Shelley, where Ozymandius is referred to as the "king of kings." The poem is about the destruction of his empire. While Ozymandius is arrogant about his status, there's nothing left for him to rule.

Could this be what Kai wants — for the destruction of the current "empire" (the U.S.)? It seems that he wants complete chaos, so it's possible. If that's the case, the poem (and name) "Ozymandius" is completely relevant. It could signal that Ozzy is born to be the eventual cult leader. Anon33157 was also correct in predicting that Ivy is a part of the cult, so they're already good at AHS theorizing. Another Reddit user, Nomaam8, believes that Kai and Ivy had Ozzy together. It's still unknown which parent carried Ozzy as of now (or if one of them did at all). Ivy did say in Episode 5, "Holes," that the only thing she loves is her son right now. That doesn't confirm that she's his biological mother, but it could be a hint — especially because she's in the cult. I don't know if they conceived naturally, or if Kai was merely a sperm donor, but I'm sure the logistics will be revealed eventually.

Another thought floating Reddit was that Oz is actually Michael Langdon aka the Antichrist from Murder House. Some users, such as StripperGirlDelilah, dispelled that theory, though. The ages of Oz and Michael don't add up (Oz is 10 yet Michael was born in 2011). Michael was also with Constance until at least 2015, which would mean he was with Ally and Ivy less than two years, which doesn't appear to be the case. It seems that the most believable theory is that Kai is Oz's father. I have a feeling the person's identity will be an important element to Cult, so I hope whoever it is will be revealed soon.