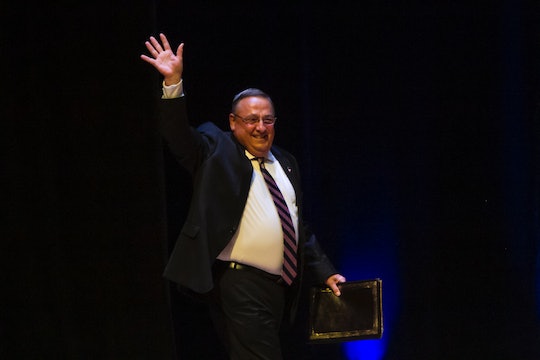 Paul LePage's Comments To John Lewis Are Not OK

On Tuesday, Paul LePage, the Republican governor of Maine, said Georgia Representative and icon of civil rights John Lewis should "thank" 19th century Republican presidents for fighting for the rights of African-Americans, and that he "ought to look at history" before criticizing president-elect Donald Trump. Who thinks that went well for him? And just who is Paul LePage, the man who's set off a firestorm of responses for his comments?

Recently on NBC News, Lewis said that Donald Trump was not a "legitimate" president. Trump's response was to tweet that Lewis was "All talk, talk, talk - no action or results." As Lewis is a highly-regarded icon of and activist for civil rights, this didn't go over well, and a lot of government representatives pulled out of attending the inauguration this Friday over the remarks. But LePage had a different response.

LePage said on WVOM Maine radio's George Hale and Ric Tyler Show, "How about John Lewis last week? Criticizing the president. You know, I will just say this. John Lewis ought to look at history. It was Abraham Lincoln that freed the slaves. It was Rutherford B. Hayes and Ulysses S. Grant that fought against Jim Crow laws. A simple 'thank you' would suffice." LePage's office did not immediately respond to Romper's request for comment.

LePage has been criticized highly for his remarks, especially following days of many people weighing in on both sides of the John Lewis/Donald Trump debacle. So who exactly is Paul LePage, and why did he think taking on John Lewis — a highly-respected civil rights leader, politician, and recipient of the Presidential Medal of Freedom, the highest civilian award of the United States which was awarded to him by President Barack Obama — was a great idea?

According to his Maine.gov webpage, Paul LePage is described as having "spent most of his life tackling one challenge after another, the kinds of challenges that defeat most people." Indeed, as the "oldest son of eighteen children in an impoverished, dysfunctional family," and apparently a survivor of domestic violence, it sounds like the guy has had to overcome some challenges.

LePage went to college at Husson College in Maine, and later earned an MBA from the University of Maine. He worked at various businesses, eventually becoming general manager of Marden's, a Maine-based department store.

His political career seems to have started when he served two terms as a Waterville, Maine city councilor. He became mayor in 2003, and stayed in that role until he took office as governor of the state in January 2011.

The governor seems to have an official Twitter account, though it doesn't have a verified check mark as of this article's publication.

One way to get a sense of who a government representative is is by looking at their record on political positions. LePage opposes abortion, and he's said some controversial things about drug policy. When it comes to families impacted by drug abuse, LePage has said he believes "that if welfare recipients with histories of felony drug convictions continue to use drugs and refuse to go to rehab, the state should take their children away." He said of the hypothetical parents:

They just don’t care for their kids. If we’re bending over backward to get them into rehab, and they don’t want to go into rehab, what kind of environment are they giving their children?

According to State & Capitol, Maine’s Child Protection Act does not include parental drug abuse by itself in its definition of child abuse and neglect, but it can be a "contributing factor to the kind of abuse or neglect that can cause the state to intervene and begin a process that can, ultimately, lead to termination of parental rights."

If LePage's State of Maine government webpage paints him as someone who's overcome challenges, one would hope that he would show more respect towards someone like John Lewis, who has a recorded history of having to overcome quite a lot to get where he is today. The man was quite literally beaten for his beliefs and for fighting for civil rights, and he probably didn't much care what the political party affiliations of those who ordered the attacks were.

Others used the strange angle by which LePage criticized Lewis against him:

In any case, Paul LePage is a government representative, and his comments are not likely to be brushed aside any time soon so long as he's pursuing political public service. On his Maine government webpage, he is described as having "entered a seven-way primary contest for the Republican Nomination for Governor with very little name recognition among the party faithful," when he ran for the position in his state.

If nothing else, this situation has certainly guaranteed him more name recognition. To learn more about Governor Paul LePage, check out his About page on the State of Maine website. And if you feel so inclined, there are ways to contact his office about how you feel about his comments towards John Lewis.