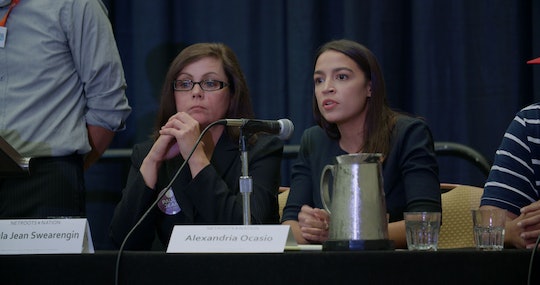 With the onslaught of political madness coming at you 24/7, you may have missed some of the more important candidates from the midterm elections. In the new Netflix documentary, Knock Down the House, you'll meet four incredible women just getting started in politics. Among those is a name you may not have been familiar with until she ran against Senator, Joe Manchin. If you still don't know who Paula Jean Swearengin is after this, I can't help you.

In Knock Down the House, Swearengin represents a part of the country that is largely working class and in need of big changes if there's to be anything left for future generations. The Democratic single mom of four from Wyoming County, West Virginia, was, according to the Netflix description of Knock Down the House, "fed up with watching her friends and family suffer from the environmental effects of the coal industry." She then ran for a spot in the U.S. Senate, but lost to the three-decade political opponent, Manchin (on his second six-year term). The activist-turned-candidate was previously referred to as "the no-name candidate," but after this documentary, you'll never forget her name again. Swearengin identifies as a coal miner’s daughter and coal miner’s granddaughter, who often felt unheard and overlooked. Many said the former accounting clerk's bid was a long-shot — especially with her funds outmatched by Manchin by more than five times. And as far as the midterms went, they were right.

Swearengin told the Register-Hereld her hope for change, saying she considers herself progressive. "I hate the dividing labels — conservative, liberal," she said. "I identify as a progressive because I want progress." With that, she ran on a platform without a single corporate or PAC donation with the goal of gaining working class voters' confidence. "I felt like we had to do something to bring change to our state, to bring the power back to our state," she continued. "If we don’t, our children aren’t going to have anything here."

Swearengin’s political platform has been compared to that of Bernie Sanders. She began by advocating for clean air and water, and more job opportunities. That snowballed into rallies and lobbying, then speaking at events to drive home the solutions she’s proposing to these issues.

Knock Down the House follows four women on their political paths as the 2019 midterm elections took place. Alexandria Ocasio-Cortez is the main focus of Knock Down the House — she was the only successful candidate to win her bid and she is also the youngest woman elected to Congress and one of Time's 100 most influential people. But Cori Bush, Amy Vilela, and Paula Jean Swearengin are also highlighted for their powerful stances and calls to action.

Produced by Emmy-nominated filmmaker, Rachel Lears, Knock Down the House premiered at Sundance in January 2019, where it won the Audience Award for US Documentary and the Festival Favorite Award and I can see why. It's hard to say what will come of Swerengin's political future as of now. In that same Register-Hereld interview, she noted the importance of making sure every American has basic human rights. "There's no reason as a coal miner's daughter that I should have to beg for something so basic as a clean glass of water."

Whatever your political views, this inspiring documentary will give you a little more insight into the lives of those like Swearengin — and maybe they'll even inspire you.