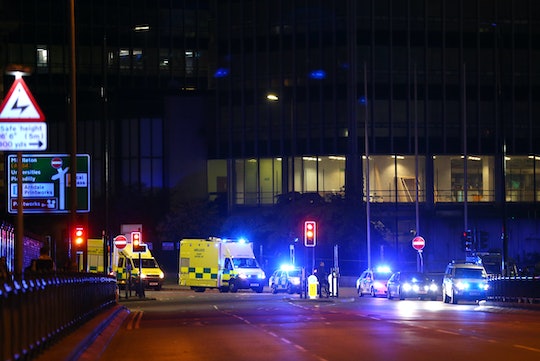 On Monday night, multiple explosions were reported following an Ariana Grande concert. Police have confirmed at least 19 dead and 50 injured, but there are also many parents still trying to find their kids. In the midst of the chaos, Paula Robinson, who helped children after the Ariana Grande concert blasts, began posting updates on social media to lend a hand — a simple, yet undoubtedly heroic act of kindness.

EARLIER: Shortly after the blasts went off at 10:35 p.m. local time, Robinson posted on social media that there were about 50 children with her who were without parents or guardians. It was late, so she took them to a nearby hotel. "Please re-post for any parents with children at [Manchester Arena]. We have taken as many kids as we can to Holiday Inn. We will keep them safe and stay with them," she wrote. In a later post, she added her phone number.

Greater Manchester Police said they would eventually set up a phone number for concerned parents to call, but haven't provided any details yet. In the meantime, they've urged people to follow their Twitter handle, @gmpolice, for updates.

It's even more difficult for people to get in and out of the area since the arena is right next to Victoria Station, which was evacuated after the blasts. All incoming and outgoing trains have been cancelled. Hence the hotel.

Parents are flocking to social media instead to track down their children or loved ones.

One woman tweeted, "My six-year-old niece was in Manchester tonight for the concert. We haven't heard from her/ her guardian and are sick with worry." Others have gotten in touch with their loved ones, but can't get to them.

Other eye witnesses described gruesome and panicked scenes as fans tried to get out of the arena after the blasts.

Sasina Akhtar told The Manchester Evening News that they saw "young girls with blood on them." She added that "Everyone was screaming, and people were running.”

Police are currently investigating the multiple explosions as a potential terrorist incident, according to a statement from the Greater Manchester Police on Twitter. For now, thanks to people like Paula Robinson, at least some of those young children and teens who witnessed the terrible scene have a place to wait out the chaos.