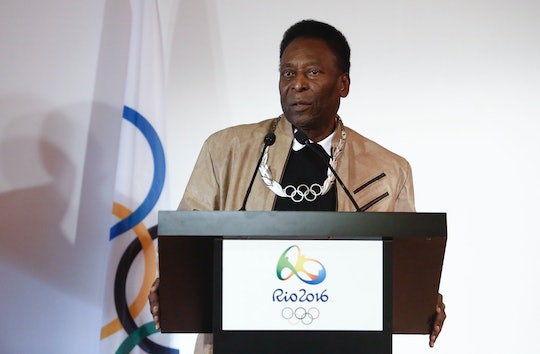 Who Is Pele? The Rio Olympic Torch Lighter Is A Brazilian Soccer Legend

Update: According to the BBC on Friday, Aug. 5, Pele will not be attending the Rio Opening Ceremony and will not light the Olympic torch. The BBC reported that Pele won't attend because he had hip surgery earlier this year and has suffered from muscle pains. In a statement, Pele said, "I'm not in physical condition to take part in the opening ceremony. Only God is more important than my health. In my life, I've had fractures, surgeries, pain, hospital stays, victories and defeats. And I've always respected those who admire me." Romper regrets this error.

This year's Olympic Opening Ceremonies is being promoted as the "sexiest ever" featuring an appearance from Brazilian supermodel Gisele Bundchen playing the iconic "Girl From Ipanema" from the famous 1962 song. But the night won't just belong to Bundchen. In addition to the world's most famous model, the Olympic ceremony will feature famous athlete Pele, who will have the honor of lighting the Olympic torch, according to The Daily Mail. Who Is Pele? The Rio Olympic torch lighter is widely regarded as the most famous soccer player in history.

On Friday, more than 6,000 performers, who the Daily Mail reported will be "scantily clad," will put on a show themed around "the evolution of the people of Brazil" in front of a worldwide audience of nearly one billion people.

But at the center of the spectacle will be Pele, tapped to light the Olympic torch to kick off the Rio Games.

Pele, revered as the "King of Football," was expected to play a big role in the Olympics hosted by his home country. The footballer already welcomed the Olympic flame to his Brazilian home town of Santos, on July 22, at the museum honoring his legendary contributions to sports in general and football in particular. Pele has won three World Cup titles, is the all-time leading goal scorer, was named the International Olympic Committee "Athlete of the Century," and last June was awarded an honor called the "Olympic Order," according to the Rio 2016 Olympics website.

“We have to be thankful because not everyone has this opportunity to be involved in an event like this,” Pele said at the Santos Olympic ceremony. “So I thank God, and all the team who made this possible. Let’s go forward Brazil.”

Here's Pele at that ceremony.

According to ESPN Classic, the only other athlete nearly as popular or powerful as Pele worldwide was Muhammad Ali.

Here are just a bit of evidence of Pele's influence during his peak playing years in the 1960s and '70s.

In Nigeria a two-day truce was declared in the war with Biafra so that both sides could see him play. The Shah of Iran waited three hours at an airport just to speak with Pele. A survey in the early 1970s showed that the name Pele ranked behind only Coca-Cola as the most popular brand in Europe.

Since his retirement, Pele has served as an ambassador for international brands, his sport, and Brazil, causing many to speculate that Pele would be the obvious choice to light the torch in Rio. Turns out they were right.