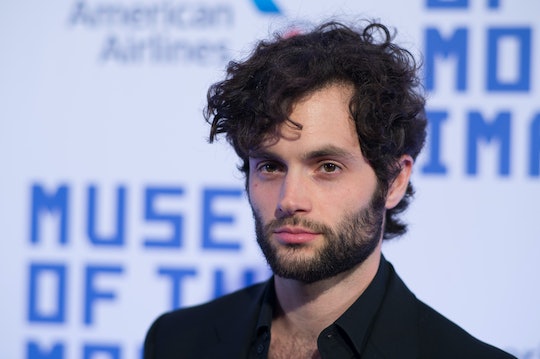 Have you heard the latest? According to E! News, another Gossip Girl alum has tied the knot and everyone is wondering who Penn Badgley married. As it turns out, the actor reportedly recited his vows to singer Domino Kirke, sister of Girls actress Jemima Kirke, in a simple courthouse ceremony in Brooklyn on Monday afternoon. Romper reached out to Badgley and Kirke's reps for comment on the reported nuptials and is awaiting a response.

The low-key ceremony seemed very appropriate for the pair who have kept their relationship out of the spotlight, although they’ve been romantically linked for nearly three years, according to Hollywood Life. According to Us Weekly, Bragley previously dated his Gossip Girl costar Blake Lively for three years and actress Zoe Kravitz.

E! News reported that the newlyweds were among several of their friends and family members, who later shared photos of the beaming couple at the ceremony on social media.

In one photo, Badgley, who is best known for his role as Dan Humphrey on The CW's series Gossip Girl, looked handsome wearing a simple navy suit with a black tie with his arm around his bride, who looked stunning in a white, long-sleeved lace dress as she smiled from ear to ear.

"Congrats to a couple beautiful people," read the caption posted by Darren Will, a friend of the pair.

Kirke's other sister, Lola Kirke — an actress and best known for her starring role in Amazon's Mozart in the Jungle — also shared a photo from the big day of all three sisters and Kirke's 8-year-old son, Cassius Riley, who she has from a previous relationship.

"When someone gets married in a courthouse, it’s really an open invitation to everyone but the beautiful bride to explore all that fashion has to offer," she captioned the photo from the courthouse. "Here, I try a look simply called 'Pants,' as Cassius goes for 'That Dude from #incubus' and Jemima experiments with 'Off to Therapy!' Congratulations @dominokirke. We love you."

According to Hollywood life, the 30-year-old Gossip Girl alum's career in front of the camera has slowed down after the CW hit ended in 2012, while 34-year-old Kirke previously had a career as a musician until she founded her own doula business in 2009.

Badgley's lonely boy days are officially a thing of the past now that he's a married man. And from these brief glimpses of the ceremony shared on social media, it looks like married life suits them both very well. Congrats to the happy pair!