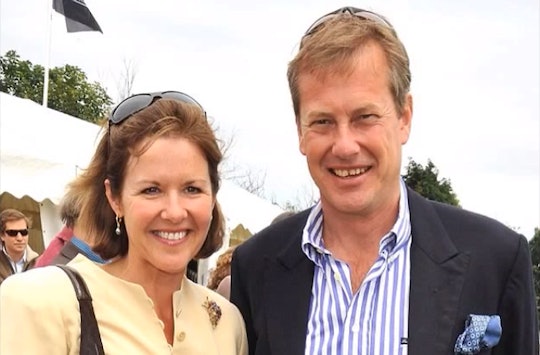 Meet Penny Mountbatten, The Woman Who's Walking Her Royal Ex Down The Aisle

Just when you thought you'd familiarized yourself with every member of the British royal family and all of their important life events, along comes another. And whether you're a newly-minted anglophile, or completely Zara-and-Eugenied out, you're going to love the story of Penny Mountbatten, owner of the most British name that ever existed. Who is Penny Mountbatten, you ask? The royal-adjacent socialite is an event planner and brand ambassador who gives formal British etiquette courses and insider tours of exclusive U.K. locations, but what's really interesting about her is her relationship with her ex-husband, Lord Ivar Mountbatten, the third cousin once removed of Queen Elizabeth, great-great-great-grandson of Queen Victoria.

To be clear, this isn't a case of a woman being defined by her more famous husband; this is about divorce and co-parenting done right. Lord Ivar married Penny in 1994, according to the Daily Mail, and the couple had three daughters together: Ella, age 22; Alexandra, 20, and Louise, 15. They divorced in 2011 but remained on good terms. No, that's putting it mildly. They're on fabulous terms, to the point that when Ivar remarries later this summer, Penny will be the one walking him down the aisle to give him away to his groom.

When Ivar weds his partner, airline cabin services director James Coyle, in the private chapel at Mountbatten's estate in Devon, he'll be the first member of the royal family to enter into a same-sex marriage, according to The Advocate. It was his daughters' idea to have their mother give their father away to his new husband. The entire family remains close-knit; Penny lives just 200 yards away from Ivar and Coyle, and they spent holidays and vacations together, walk their dogs together, and even share weekly meals with each other, according to the Daily Mail. Coyle said he and Penny take yoga classes together, and he'll often stop by her house for coffee and a bit of gossip. "I can say Ivar did this or he said that… after all, she's been there, too."

Ivar had identified as bisexual since his teens, he told the Mail, and although he didn't come out until 2016, Penny was aware of his orientation before they married. "Being a Mountbatten was never the problem," he said. "It was the generation into which I was born. When I was growing up, it was known as 'the love that dare not speak its name.' But what's amazing now is how far we have all come in terms of acceptance." Queen Elizabeth supports the upcoming wedding, although it doesn't matter in terms of royal protocol. While the Royal Marriages Act requires the core family members to request formal permission from the queen before marrying, according to the Washington Post, that doesn't apply to Ivar.

Although Penny was accepting of Ivar's attraction to men, sadly, it did contribute to the breakup of their marriage. In a joint interview with the Daily Mail, she explained:

I married Ivar with a completely open heart and an open mind about sexuality. Ivar had told me he was bisexual before he proposed. I didn't have any fears about it because I loved him, and love conquers all, doesn't it? What I hadn't realized is how jealous I would feel down the line when he was finding men attractive and how, ultimately, that made me feel that I wasn't good enough.

Ivar offered his own insight: "Maybe what happened is, with me being so open, I'd mention it to Penny and that would make her upset. Perhaps, on reflection, I shouldn't have said anything but, again, I don't want ever to hide anything from anybody."

But now, the pair are happier than ever in their new roles as close friends, and Penny's even helping with the wedding plans.

What I don't think Ivar realizes is how much he has changed as a man since he came out. James is hugely responsible for that because he's so much fun. Ivar is so much more relaxed these days. He's so much kinder ... He probably wasn't even aware that by keeping his sexuality a secret, it was really quite tormenting him. Now it's out, he's a completely different person.

Congratulations to the happy couple, the happy daughters, and especially the happy ex-wife. If only every ex-couple could be this mature and loving.