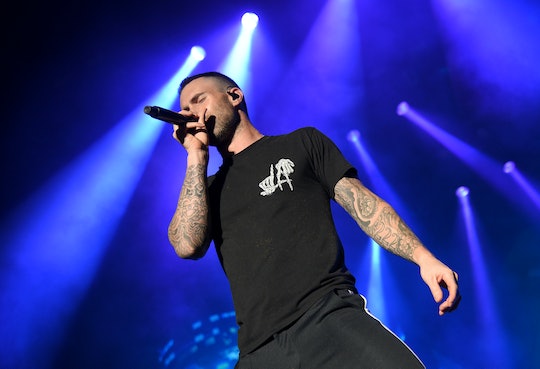 Here's Who Will Be Headlining The 2019 Super Bowl Halftime Show

This is the time of year when I always get super excited for the Super Bowl. And I’ll be honest, unless the Denver Broncos are playing it has very little to do with the game and everything to do with the commercials and halftime performance. Same? So if you're like me, you're probably wondering who's performing at the 2019 Super Bowl halftime show.

This year’s performance is headlined by Maroon 5, according to Sports Illustrated, and the group will be joined onstage by rappers Travis Scott and Big Boi from Outkast. Planning the show has not come without some controversy this year, however, as another big artist turned down to opportunity to perform, in solidarity with Colin Kaepernick and other football players who chose to kneel during the national anthem, according to Billboard.

Rihanna was reportedly asked to perform, according to Rolling Stone, but the singer disagrees with the NFL’s stance on players kneeling, as Us Weekly reported. The league policy says that players can stay in the locker room during the anthem, but that everyone on the field should be standing, according to SB Nation. In September, they did decide to put off fining players and teams for kneeling until there are further talks about the issue, according to Bloomberg.

That means that RiRi passed on the opportunity to perform at the biggest televised broadcast of the year. In 2018, 103.4 million people watched the game between the New England Patriots and Philadelphia Eagles, according to CBS News. That number was actually a decrease from 111 and 114 million viewers the previous two years, and the lowest viewership since 2009, the news outlet reported.

Rihanna isn’t the only one who took a stand on the kneeling policy. Travis Scott was reportedly only convinced to perform after the NFL agreed to donate $500,000 to The Dream Corps, according to Newsweek. The organization describes itself as “committed to the growth of all people, especially the marginalized and mistreated.”

Scott was widely criticized for signing on to the show, according to SB Nation. The game is being played in Atlanta and Maroon 5 was reportedly struggling to find some Atlanta-born talent to join them on stage; when Scott was announced, other artists spoke out against the decision, as the outlet reported.

The Rev. Al Sharpton told TMZ: “I think anyone that goes into the halftime show is in effect directly violating those that want to raise the question that the NFL should come to terms with what they have done and continue to do to Colin Kaepernick and those that protest on criminal justice issues."

But now that the lineup for the big game is set, what could be in store for the halftime show? In previous years, the performance — whether by virtue of spectacle or showmanship — has been one of the biggest talking points among the nation. Who could forget Lady Gaga’s fleet of drones, and of course the wardrobe malfunction heard around the world? And although everything is time-compressed for the game, artists including Prince, Madonna, Beyoncé, The Black Eyed Peas, Aerosmith, Justin Timberlake, and Bruno Mars still managed to put in musical performances that have gone down in history.

We’ll just have to wait to see what’s in the works for Maroon 5 and Travis Scott on Sunday, Feb. 3.