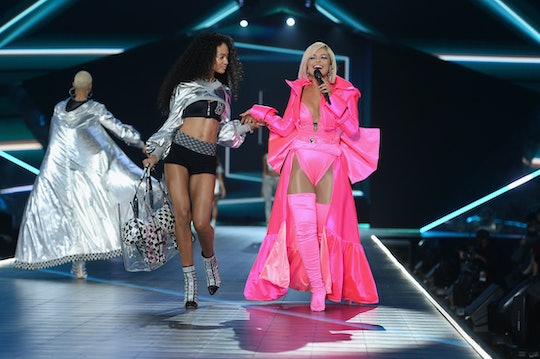 The show — which was originally taped in New York City in early November — will air on Sunday, Dec. 2 at 10 p.m. ET on ABC. This year’s lineup of artists includes some of the biggest names in the music industry, including Bebe Rexha, The Chainsmokers, Halsey, Kelsea Ballerini, Rita Ora, Shawn Mendes, Leela James, and The Struts.

Traditionally, musical performances at the Victoria’s Secret Fashion Show would be solo features, but in recent years, performers have been taking the stage alongside the models. The show has hosted some of the most memorable musical spectacles on TV, including Nicki Minaj’s performance of “Super Bass” in 2011 and Taylor Swift and Fall Out Boy’s performance of “My Songs Know What You Did In the Dark” in 2013.

But along with the big name performers, the show will feature some of the most well-known names in modelling. According to People, veteran model Adriana Lima will be returning for her 19th walk down the VS Fashion Show runway, and new mom Behati Prinsloo is returning after two years of back-to-back pregnancies. The Victoria's Secret website noted that Alessandra Ambrosio, Candice Swanepoel, Lily Aldridge, Elsa Hosk, Jasmine Tookes, Josephine Skiver, Lais Riberio, Martha Hunt, Romee Strijd, Sara Sampaio, Stella Maxwell, and Taylor Hill will also be walking the runway this year.

Undoubtedly, the models generating the most buzz are Kendall Jenner and Gigi Hadid. Jenner was notably absent from last year’s show in Shanghai, China, but in an Instagram post from the show, she noted how honored she was to be back this year. For undisclosed reasons, Hadid backed out of last year’s show last minute, but in a post on her IG, she revealed how excited she was to come back.

“I had the best time Thursday night @victoriassecret [and] on Dec 2nd we share the full show with the world, but those couple of days we truly shared with each other," wrote Hadid. “I feel so lucky to be able to work with not only incredibly inspiring women I’ve looked up to what feels like my entire life, but a full cast of girls who genuinely embraces supporting, LOVING, and uplifting one another.”

But while the VS angels shared their support and optimism for one another, Ed Razek — the chief marketing officer of Victoria's Secret's parent company L Brands — has been under fire for his insensitive comments about the standards of beauty and inclusivity in the show. In an interview with Vogue, when asked about why they don’t include trans and plus-size models in the show, Razek said it was because the show is a “fantasy” and a “42-minute entertainment special” geared towards a specific audience. Razek later tweeted an apology for his comments and clarified that while many transgender models have auditioned for the show, they just weren’t good enough make the cut. Eeek.

Amid all the controversy and outrage, the Victoria's Secret Fashion Show is still set to air with its huge lineup of stars. The one-hour special premieres this Sunday at 10 p.m. ET on ABC.

This article was originally published on November 30, 2018