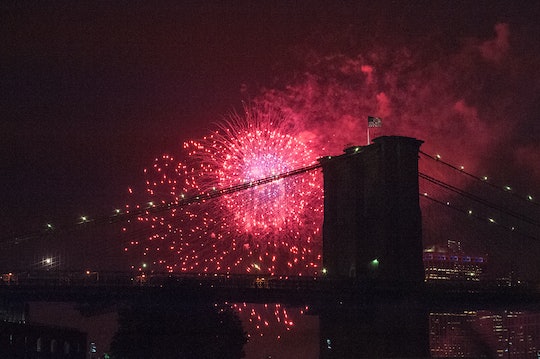 Summer is here, which means it's time to celebrate. All season long people will be gathering around fire pits, hanging by the pool, or hitting the beach, but the party will really kick off on the 4th of July. In New York, the celebration culminates with an elaborate fireworks show put on by Macy's. The pyrotechnic display will light up the skyline along the East River and the Seaport District, and that's only some of the excitement that's in store. The event also features performances from some of the biggest musicians in the game and this year they've selected a special star to take the stage for what's sure to be an epic performance. So who's performing on Macy's 4th of July Fireworks show this year?

The event will be set to a score of American classics, like "America the Beautiful" and "Stars & Stripes Forever," according to the event website. It will also feature fireworks choreography to John Williams' beloved title compositions from Star Wars, Superman, E.T., Max Steiner's "Casablanca Suite," and Alfred Newman's "20th Century Fox Fanfare." Amid the elaborate show, Macy's will be celebrating the 80th anniversary of The Wizard of Oz with a performance of "Over the Rainbow" by none other than Jennifer Hudson.

Macy's announced that Hudson will perform while a barrage of rainbow-colored effects are launched from the Brooklyn Bridge and surrounding barges. While she performs, Macy's infamous Golden Mile, which sees fireworks light up the skyline for a mile with a slew of golden-colored effects, goes off.

Every Macy's 4th of July fireworks show features high-profile performers. In 2018, according to AM New York, Kelly Clarkson and Blake Shelton performed at the show along with Keith Urban and Ricky Martin. American Authors also made an appearance to perform their hit 2014 single, "Believer." Clarkson was given the distinct honor of performing "God Bless America" during the 2018 Macy's 4th of July fireworks show. Meanwhile, the West Point Band and Glee Club played "The Stars and Stripes Forever" and "The Star-Spangled Banner."

The 2018 display was the "largest display since the Millennial Celebration," according to Curbed. More than 75,000 shells were launched during the 25-minute fireworks show, up from 60,000 the precious year. The 2018 display focused on the Brooklyn Bridge, Curbed reported.

This year's fireworks show is set to air from 8 p.m. to 10 p.m. ET, according to Macy's event website. Those hoping to catch a glimpse can camp out along the East River or below the Brooklyn Bridge for the best views. Dedicated entry points will be established along elevated spots along the FDR Drive in Manhattan. Those looking to see the show live can get more information about where to see it here. You can also catch the show without all the chaos on the radio by tuning in to 1010 WINS, or on TV by tuning in to NBC's national broadcast.

It's not summer in New York City without Macy's annual 4th of July fireworks show, so try not to miss it. If you do, you'll surely see some highlights on your friends' Instagram feeds. Sorry in advanced about the quality, though.