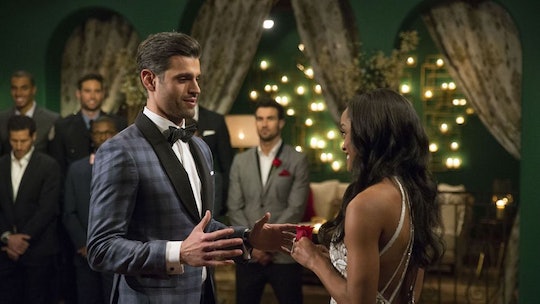 In case you haven't uttered the name "Peter Kraus" yet this week, here's your irregular reminder it's time to get caught up in all things Peter. Whether you loved or hated him on Rachel's season of The Bachelorette, or loved or hated him on Total Bellas, dude must have game to appear in all these lovely women's lives. It doesn't matter if you're rooting for him (or rooting for him to flop), there might be some part of you wondering who Peter Kraus is dating now, and don't worry — you're totally normal for thinking it.

As of right now, Peter seems to be single-ish. Let me clarify. Though the Total Bellas episode that shows Peter's date with Nikki Bella — ex-fiancée of WWE star, John Cena — is set to air, that "awkward" first date happened awhile ago. Since then, Nikki has confirmed she's single. I guess the first on-camera date date wasn't successful? Regardless, Peter was recently tied to fellow Bachelor Nation contestant, Bibiana Julian after the pair were spotted at a Miami Heat game together. Bibiana opened up to other former Bachelor stars Ben Higgens and Ashley Iaconetti on a podcast, stating that while she and Peter never appeared on their respective shows together, they became friendly afterwards. Peter apparently claimed they met at a charity event to which Bibiana clarified, "Him and I actually connected right after I got back from Paradise, so that’s kind of, like, when it started off,” she said. "We stayed friends and then he was visiting Miami and I was, like, 'Why don’t we go to a Heat game?'" Bibiana later added via Twitter "'Charity event'—you mean staying at my place for 4 days during the busiest week in Miami and leaving without saying goodbye or thank you?" Burn, Peter. Major burn. Anyway, Bibiana is dating someone who's not Peter now.

As for Peter, little has been said about his current romantic status. If you dig through his Instagram, you'll find pictures of him working out, being fit, and kids, mostly. That's not a bad thing — unless you need to know who he's dating.

Nikki and Peter's upcoming date probably won't go the way you think it will (especially if she says she's still single). When asked about it, Peter told Us Weekly, "It was a chance to go on a date with Nikki Bella. I was like, ‘Yeah, I’ll take that.’ Whether it’s on TV or not, I don’t care." It's not clear whether the date was because he had a genuine interest in her, or if all the Peter Krause haters are right about him. Nikki said their interaction was uncomfortable anyway because it was her "first date in over six or seven years." She also added, "It was so awkward and I totally got drunk." She also confessed it was "awkward" to have a camera crew in their faces the whole time. Relatable.

In a clip posted on E!, Nikki's brother-in-law, Bryan exclaims how "hot" Peter is. Sure, he brings flowers, and yes, Nikki seems impressed. But again, they're not together now. Based on Peter's social media presence, it looks like he might be too busy to date much anyway. With kids, an adorable dog, and all that working out (seriously; I'm tired just looking at the pictures of the workouts), maybe he's single because he wants to be. Or, there could be a special someone he'd rather keep private for now.

If you really want to know who Peter is dating, I recommend scouring his Insta. It's there you'll see more pictures of his dog, and that's way better than girlfriend photos anyway.