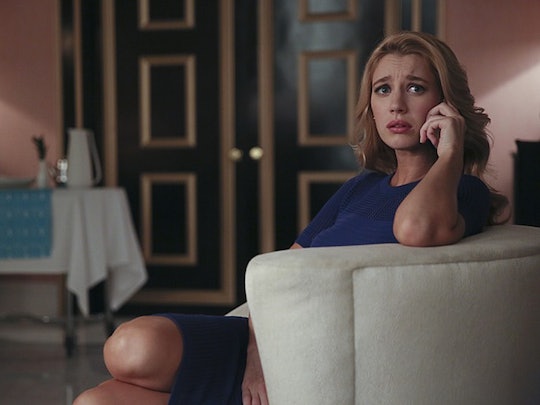 Who Is Petra's Twin On 'Jane The Virgin'? She's Definitely Up To Something

One of the things Jane the Virgin does best is pull out a last minute twist guaranteed to make your jaw drop. From characters getting impaled on ice sculptures to babies getting stolen from hospitals, this show has made soap operas proud with their dedication to shocking turns. In Monday's episode, "Chapter Thirty-Nine," the show did it again. After spending the length of the episode leading the audience to think that Petra's postpartum struggles had pushed her to abandon her children and leave town, it was revealed that it wasn't actually Petra that audiences had been watching all night. It was her twin. But who is Petra's twin on Jane the Virgin?

So far, the facts are sparse. There isn't a whole lot of information to go on: we know she's a brunette, she has a slightly stronger accent, and she was seen caressing a photograph of Rafael and Petra printed in a magazine. It's all very suspicious, but not exactly concrete. However, there are some hints as to what she's going to get up to, even if there's no explanation for who she is. That photograph could definitely mean she's up to something; creepy picture stroking is pretty much the clearest sign of a stalker when it comes to TV.

There's also the fact that she doesn't seem to be nearly as well-off as Petra, financially, and considering that we know Petra didn't come from money, that's no surprise. Could Not Petra be angling some kind of Single White Female identity theft? If so, it seems counterintuitive to dye her hair brown so she's more easily distinguishable from Petra. There were no hints from Petra's mom that there was another sister floating around, though Petra's surprise twin daughters make a lot more sense if twins run in the family. Petra herself certainly seemed shocked, so it's clear she had no idea. Not Petra, on the other hand, was absolutely thrilled to find her long lost sister.

Until we learn more about Not Petra (like, say, her actual name), all we can do is eagerly await the fallout of this bombshell (and enjoy Yael Grobglas' sure-to-be-flawless acting, of course). Whatever Not Petra is up to, it's definitely not going to be what it seems. The easiest explanation for her existence is that Petra's mother simply lied about having another daughter, but this episode proves that sometimes the simplest explanations are misleading. Hey, maybe Not Petra is Sin Rostro with some serious plastic surgery! Crazier things have happened.