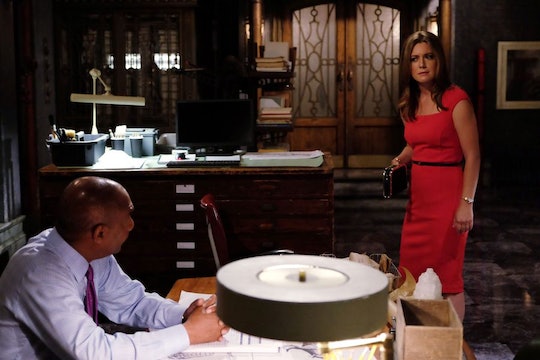 There's a new big bad on Scandal and it's... well, no one really knows for sure who they are. All fans know so far is there's a mysterious blonde woman who's straight up evil, but also fans kind of love her. Then there's someone named Peus, apparently, but who is Peus on Scandal? Darby Stanchfield, who plays Abby, may have spilled the beans on that one. During an interview with Yahoo TV, she referred to "Peus and Mystery Woman," as the people fans believed she was working for. She then went on to discuss the lunch scene she had with the two characters during the Abby-centric episode, which seems to indicate Peus is the mystery man who offered her $300 million. But who is he really and why does he and the Mystery Woman want Mellie to be president so badly?

That's all still a mystery that will hopefully be revealed soon. For now, one thing is certain, Peus cannot be trusted. Abby made the mistake of falling into their trap and it almost got Huck killed. Now, it's up to Olivia to help Abby and everyone else get out of this mess — hopefully without any other lives being taken (RIP Rowan's kinda-girlfriend). Thank goodness Olivia's a natural born fixer. Still, even this foe may be too much for Pope and Associates to handle.

The Mystery Woman already made it clear to Rowan that they've got eyes on Olivia and as Rowan said in the preview for the next episode, if Cyrus becomes president instead of Mellie, Peus & Co. will kill Olivia. So what's a fixer to do? Knowing Olivia, she won't go down without a fight, but Mellie may end up going rogue. She's wanted to be president for a long while and she doesn't seem to care how she gets to the Oval Office as long as she gets there.

It wouldn't be surprising if Peus and/or the Mystery Woman got in contact with Mellie and made her an offer similar to the one they made Abby. And she may just take it, especially since Olivia's no longer on her side. Hopefully, Mellie's smart enough not to make Abby's same mistakes, but with the presidency on the line, Mellie could definitely be easily persuaded.

The promo for the new episode promises that there will be blood and it's clear that Peus and the Mystery Woman will go to any lengths to get what they want. It seems someone will definitely get hurt if Cyrus does become president, the only question is who?