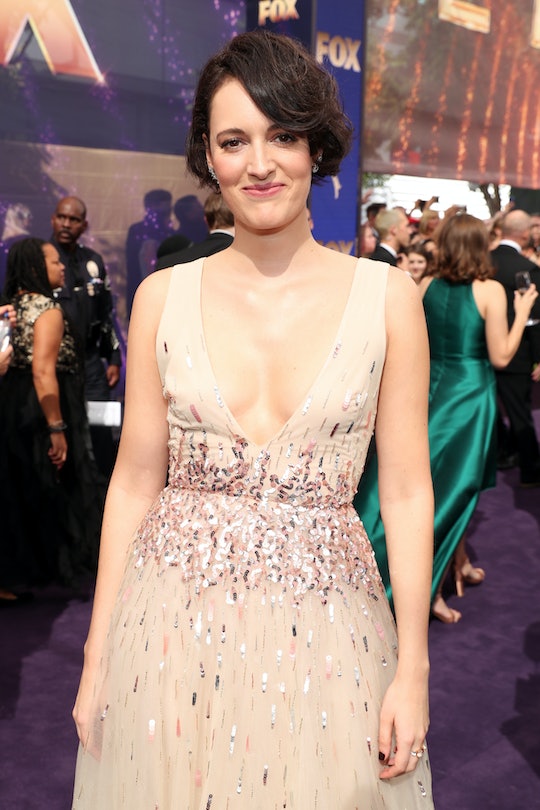 On Sunday evening, the 2019 Emmy Awards featured a number of memorable acceptance speeches. One of them came from a relatively new face — at least for viewers at home who have never watched Fleabag. So, who is Phoebe Waller-Bridge?

The tall and charismatic Waller-Bridge took to the stage to accept the Emmy award for best actress in a comedy series, according to The Hollywood Reporter. And she definitely kicked off her speech with a bang. "I find writing really, really hard and really painful," she told the audience. "But I'd like to say just honestly, from the bottom of my heart, that the reason that I do it is this," she said jokingly, while pointing to her shiny new award. "So it's made it all really worth it, guys."

If you're like me, though — knee-deep in diapers, tantrums, the school run, and just getting through the day — then you might not be familiar with Fleabag. And if you're even more like me, you absolutely have an Amazon Prime membership. So you can simply head on over to Amazon Video and check it out the comedy series yourself! That's right, Season 1 and Season 2 of Fleabag are included with Prime. And Phoebe-Waller Bridge just happens to be the creator, writer, and star of the British series.

The interesting thing about Fleabag is that Season 1 premiered back in 2016. (So it's not as new as I originally thought.) It wasn't until three years later — Spring 2019 — that the second season came out. And has taken off significantly. In fact, Fleabag went into the Emmy Awards on Sunday with an impressive 11 nominations, according to Indie Wire. So there was a fairly good chance viewers would be seeing Waller-Bridge onstage at some point accepting an award.

But where did this hilarious, multi-talented woman come from? Apparently, the British actress has some prominent roots, according to The Oprah Magazine. (Spoiler alert: She descends from individuals with titles like "Sir" and "Baronet.") Waller-Bridge has has a music manger brother named Jasper Waller-Bridge and a composer sister named Isobel Waller-Bridge.

Something else interesting about her? She auditioned for Downton Abbey back in the day — but was evidently too funny for the role. "I went in, and I remember it was quite a serious part and I had really been auditioning for comedy for a couple of years and I was really thrilled to come in for this part, so I put my heart and soul into it," Waller-Bridge told The Hollywood Reporter. "I went in thinking, 'I'm going to give my best, sincere, heartbreaking performance'. It was a really beautiful scene in a church; there's a little clue." She continued:

And I went in and I gave this really heartfelt audition. And when I finished, they were like, 'We had no idea she was so f**king hilarious!' I had really given myself, and they're like, 'Oh, yeah, you're not right.'

If you can't get enough of Waller-Bridge at this point, allow me to point you in the direction to get your next fix. In addition to Fleabag, Waller-Bridge was the hilarious star behind Killing Eve. Oh, and she's also co-writing the Bond 25 screenplay, as well as an HBO series called Run. Plus she'll be hosting Saturday Night Live come October. Thankfully, it doesn't seem like Phoebe Waller-Bridge is going anywhere anytime soon.