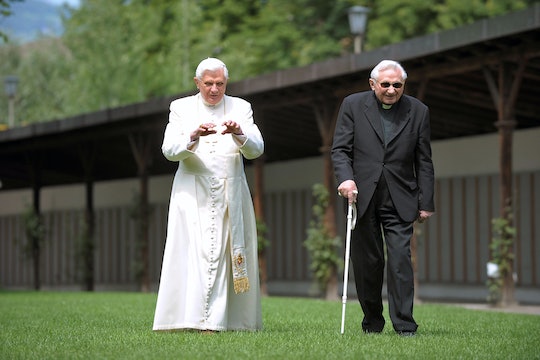 More than 200 young boys who sang in a famous German boys choir were abused over a period of four decades, The New York Times reported Monday. For 30 years, the choir was led by George Ratzinger, the brother of former Pope Benedict XVI, according to the Times. Who is Pope Benedict XVI's brother, George Ratzinger? Ratzinger said Sunday that he was completely unaware of an incidents of child abuse that occurred within the choir, according to the International Business Times.

"I have not known that at that time any sexual abuse had occurred," Ratzinger told PNP, a Bavarian German newspaper, according to the IB Times. Though no charges are being filed against Ratzinger, he's being heavily scrutinized for whether he was aware of the alleged sexual abuse that occurred within the Regensburg Domspatzen choir.

Ulrich Weber, who was commissioned by the choir recently to look into accusations of beatings, sexual abuse, or torture held a press conference Monday in Regensburg, Bavaria, where the choir has its roots. Accordign to the Times, he "estimated that from 1953 to 1992, every third member of the choir and an attached school suffered some kind of physical abuse."

Weber based these findings on more than 140 interviews and research he conducted, according to the IB Times. Weber said he believes most of the beatings and other mistreatment came from Johann Meier, who directed a lower school that funneled students into the choir from 1953 to 1992, according to the Times. Meier died suddenly in 1992. Though the choir conducted an investigation in 1987 related to abuse, its leaders chose not to remove Meier or take other action, according to the Times.

Ratzinger, who's now 92, conducted the choir from 1964 to 1992 and still lives in Regensburg, according to Slate. When the Religious News Service asked Weber if he believed Ratzinger was aware of the abuse, Weber said, "After my research, I must assume so," according to Slate:

The events were known internally and criticized, but they had almost no consequences.

Now, the cases are too old to be prosecuted, according to Slate. The AFP reported that a quarter of the abuses were sexual in nature. They were concentrated in the mid to late 1970s. Weber said that 50 victims he spoke with described 10 perpetrators, according to the AFP.

Ratzinger is former Pope Benedict XVI's older brother. The former Pope has been accused of being part of the Catholic Church's massive coverup of years of sexual abuse, though the Benedict always maintained that he was never aware of any sexual abuse, according to the Guardian.