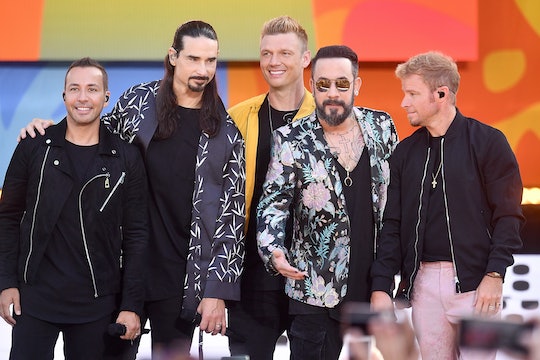 It's that time of year yet again. As the world gets ready for MTV's annual Video Music Awards, an evening that recognizes the world's latest and greatest where music and cinematography collide, audiences become understandably excited by which performers and presenters will be taking the stage. With a long and storied history of dramatic stunts and jaw-dropping moments, there's never a dull moment at the VMAs. That's why so many are probably wondering: Who is presenting at the MTV Video Music Awards? This year's lineup is super star-studded.

Entertainment Weekly reported that the VMAs, which will be taking place on August 20 at Radio City Music Hall in New York City, will be graced by one of your favorite 90s throwback bands: Backstreet Boys. They will be presenting an award as well as performing. Other presenters include: Tiffany Haddish, Kevin Hart, and Millie Bobby Brown (aside from her iconic role in Stranger Things, this year she was also seen in Maroon 5’s music video for Girls Like You with Cardi B) Amandla Stenberg, Bebe Rexha, Blake Lively, DJ Khaled, Common, G-Eazy, Gucci Mane, Keegan-Michael Key, KYLE, Lenny Kravitz, Lil Uzi Vert, Olivia Munn, Shay Mitchell, Teyana Taylor, Rita Ora, Liam Payne and Zedd.

However, knowing who is presenting is just as interesting as knowing who they will potentially be handing trophies to. Billboard reported that this year, Cardi B is at the top of the leader board with 10 noms, and she's followed by Jay Z and Beyoncé as well as Bruno Mars. Here are the other contendors for some of the biggest awards of the night:

Video Of The Year

Artist Of The Year

Other awards include best collaboration, push artist of the year, best choreography and best video direction. However, there's one more detail that many fans may be wondering about, and that's who is hosting. USA Today reported that though the host is often announced in advance, it is not yet known who will be running the evening this year.

And as for one of the most significant honors of the evening, Jennifer Lopez will be given the Michael Jackson Video Vanguard Award this year, People reported. The Vanguard Award is widely acknowledge as being the highest honor of the night, and Lopez will be accepting as well as performing. (She has also been nominated for two awards, as well.)

Regardless, this year's award show is destined to be as engaging, entertaining and downright incredible as any other. Be sure to tune in next week.