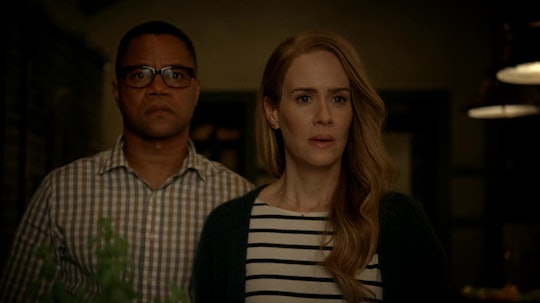 Who Is Priscilla On 'American Horror Story: Roanoke'? The Ghost Girl May Be Friend Or Foe

While we've physically seen many ghosts at the heart of the story of American Horror Story: Roanoke, there remains one key figure who we still haven't gotten a clear look at – Priscilla. Unlike Kathy Bates' "Butcher" Thomasin White, her son Ambrose White (played by Wes Bentley), the murderous nurses, and even Lady Gaga's mysterious woodland demon-witch-creature, we haven't even glimpsed a clear shot of Priscilla's face. The mystery surrounding her character is one of the more intriguing aspects of the season so far, leading us to wonder: Who is Priscilla on American Horror Story: Roanoke?

According to IMDb, Priscilla is played by Estelle Hermansen, a child actress who also appeared in the third season of Transparent. As for her character, we only know one simple fact, imparted to us through the medium Cricket Marlowe: that Priscilla is the ghost of a colonial child who is hanging around the Millers' new North Carolina property, along with hordes of other ghosts. When Cricket searched the house for "signs" of Flora, he came upon the hiding place where Lee's little girl first communicated with Priscilla. To Lee's shock and horror, he explained to her that she wasn't just an imaginary friend.

Cricket Marlowe: Priscilla is real. She's a child. She has a fondness for corn husk dolls. She died in the late 1500s.

Priscilla is actually a several hundred-year-old ghost, if what Cricket says is meant to be taken at face value.

But despite the initial assumption of the family (and the audience) that Priscilla was up to no good – given that she apparently warned Flora during "Chapter 2" that they were going to kill her and her whole family – "Chapter 3" hinted at the idea that the little ghost might actually be an ally to Lee's daughter. Based on the conversation between Cricket and the Butcher, who interrupted when Cricket was attempting to contact Priscilla, the young ghost seems to actually be an outcast among the ghostly colonists. The Butcher refers to Priscilla as "the bastard seed" and explains that she has "hidden [Flora] away" beyond the grounds, in a place that the Butcher refuses to go.

Now, if you ask me, that pretty much definitively sounds like Priscilla is protecting Flora. Perhaps it was a simple miscommunication when Flora told Lee that she was offering Priscilla her doll in exchange for not being murdered – more likely, given what we now know, Priscilla was attempting to warn Flora that "they" (meaning the Roanoke colonist ghosts, excluding herself) would kill her family and save her for last, suggesting that she and her family get out of the house ASAP.

Recall, too, that a ghostly little girl was the one who led Matt and Shelby to the cellar outside of the house, where they discovered Dr. Elias Cunningham's video about the dangers of the house and its assorted spirit inhabitants. That was almost definitely Priscilla as well, though we didn't get overt confirmation of that fact.

We still don't know Priscilla's precise motives (or why she and the Butcher appear to have an antagonistic relationship). But I'm definitely intrigued to see if her character does actually turn out to be an important ally for the Millers against the Butcher and the other, more villainous ghosts – or if we're in for some kind of huge twist where Priscilla winds up being the real "Big Bad" of the season.