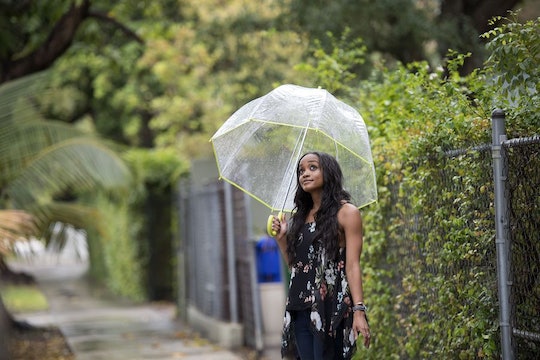 It's Time To Meet Rachel's Dad On 'The Bachelorette'

Rachel Lindsay and her three remaining suitors, Peter, Eric, and Bryan, are heading to Spain for The Bachelorette's season finale, which will serve as the shooting location for both fantasy suites and Rachel's engagement. But before that, Rachel is bringing her top three guys to Dallas, Texas to meet her family. Fans were first introduced to The Lindsays last season during Rachel's hometown date with Nick Viall, but her dad was conspicuously absent from the episode as he was away on business. So who is Rachel's dad on The Bachelorette? His high-profile job gives some insight as to why he might be shying away from the cameras.

Rachel's dad, Sam A. Lindsay, is a federal judge in Dallas, Texas. He was nominated by President Bill Clinton to serve as United States District Judge of the United States District Court for the Northern District of Texas in 1998, and was later unanimously confirmed by the Senate, making him the first black federal District Court judge in Dallas. Additionally, he received his Bachelor’s degree from St. Mary’s University and acquired a J.D. from the University of Texas School of Law. His notable cases include the sentencing of Anonymous hacker Barrett Brown in 2015, and blocking enforcement of a city ordinance in 2007 which would have allowed fines against property managers who rent to illegal immigrants.

It's unusual for a Bachelor or Bachelorette to visit their own hometown right before fantasy suites, but given Rachel's closeness with her family and the racial dynamics of this particular season, it's understandable why she'd want to introduce her top three guys to her family. And although we get a quick glimpse of Rachel's dad hugging her when Eric comes to meet the family in the promo for next week's episode, his appearance contradicts earlier reports about his involvement with the season.

Entertainment Weekly asked Chris Harrison last May whether Rachel's dad would be involved in her season (considering he opted to meet Nick Viall off-camera last year), and he said:

Not on camera, no. With his job and what he does, he just can’t. He was a big part of the show but off-camera. It kind of changed things; we had to do some things in Dallas and kind of switch things around a little bit because he plays such a big part in her life and family’s such a big part — we wanted to include that even if we couldn’t show some of it on television.

From the looks of the preview, it seems like Judge Lindsay had a change of heart, although it's possible he was only filmed saying hello and otherwise spoke to the suitors off-camera. Either way, Rachel's family isn't shy about discussing race, so the episode is guaranteed to have some refreshing conversations.