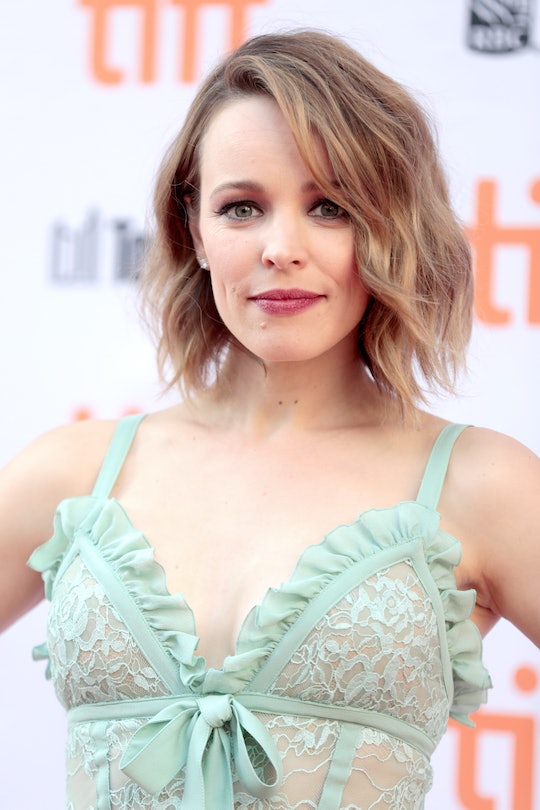 A baby boom is in full swing in Hollywood at the moment. On Thursday, it was reported that Rachel McAdams is currently pregnant with her first child, according to E! News. Although The Notebook star has yet to confirm the news herself — Romper's request for comment on the reports from the actress' rep was not immediately returned — minds immediately began wondering who Rachel McAdams is dating now and what she's been up to lately.

McAdams' love life has been a bit of mystery in recent years as she's kept it out of the spotlight. But, according to E! News, McAdams has been romantically linked to screenwriter and producer Jamie Linden since 2016. Their romance has been a bit under the radar, though. According to E! News, McAdams and Linden have "never walked a red carpet together," but they've been spotted holding hands everywhere from Los Angeles to Paris and even attended a friend's wedding together in Virginia, the outlet reported.

Though the two have not explicitly confirmed their relationship with the media, a source told Us Weekly in 2016 that they are indeed an item. "They’re dating and he took her to that wedding," a source close to Linden told the publication at the time, referring to the wedding in Virginia. "I don’t know how they met."

Linden's name is behind some blockbuster hits like Dear John and We Are Marshall, according to his IMDb page, as well the 2010 independent movie 10 Years. McAdams is not the only A-list actress the 38-year-old movie man has been linked to; Linden used to date New Girl star Zooey Deschanel, according to E! News, from 2012 to 2014.

Before making it big in Hollywood, Linden was raised in Winter Park, Florida, according to the Orlando Sentinel. And he stayed local for college and attended Florida State University, graduating in 2001 with a double major in media production and marketing, according to the university. He actually served as a commencement speaker at the university's graduation ceremony in 2014, where he talked about his success in show business. "I went from being unemployed to being a working screenwriter literally overnight," Linden told the university at the time.

Linden wasn't always behind big screen hits starring Channing Tatum, though. As he told his alma mater, he and his friends went to Hollywood after graduation because they had tickets to the Price is Right — and won! — and he ended up finding work as an assistant at a production company.

Linden doesn't appear to have a public social media presence and McAdams isn't on Instagram or Twitter either, so sleuthing for further relationship clues is tricky. Nevertheless, fans are so thrilled to hear the news that the Mean Girls star could very well be expecting her first child.

Really, Fans Are *So* Happy

Although a possible McAdams baby on the way is indeed exciting news, it's important to remember that she has yet to confirm it for herself, which could indicate that she wants privacy during this time and, yes, that's her right, even if fans think of her as Regina George and Allie Hamilton from The Notebook. And don't hold your breath for a major reveal, though, since McAdams is a fairly private person, especially when it comes to her personal life. For instance, she once told People in 2009, "I’m sorry but I don’t talk about my personal life," when she was asked about her relationship status. So rumors may remain rumors for some time.

However, if the news does turns out to be true, then fans will likely find out somewhat soon. As Life & Style reported on Thursday, McAdams could allegedly be "at least seven months pregnant" right now. In the meantime, fans can soak up plenty of McAdams when her new film, Game Night, hits theaters and get to know Linden a bit better and his upcoming projects, like his screenplay Chaos Monster that premieres in 2019.