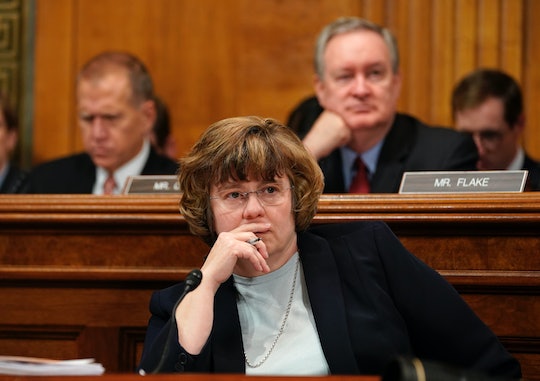 The already polarized American political climate and the #MeToo movement have converged and hit an apex this week as Dr. Christine Blasey Ford, a former classmate of Brett Kavanaugh, Trump's nomination for Supreme Court Justice, testifies before the Senate Judiciary Committee after alleging that Kavanaugh sexually assaulted and "physically abused" her when they were in school together. It's a tense moment, and potentially a turning point, and many people have questions about the trial itself. Throughout the hearings, one particular question is most likely: Who is Rachel Mitchell? The prosecutor questioning Blasey Ford has actually worked on sex crimes for many years.

CNN reported that Mitchell has been a prosecutor in Arizona for over 25 years, and that she is notable for her work on cases involving sexual assault. According to the network, Mitchell is currently the Deputy County Attorney in the Maricopa County Attorney's Office in Phoenix, and also serves as the division chief of the Special Victims Division, which "handles cases of domestic violence, sex crimes, and auto theft." Previously, Mitchell ran the sex crimes bureau in Arizona state. The Washington Post reported that Mitchell is best known for her successful prosecution of a priest in Arizona named Paul LeBrun back in 2005. LeBrun was convicted of sexually abusing young boys between the ages of 11 and 13, and was sentenced to 111 years in prison.

Slate reported that Robert Kavanaugh, an Arizona attorney who has defended clients in cases wherein Mitchell was prosecuting, told the magazine that, as an attorney, she's "reasonable," and that she's "not the kind of person who's going to attack someone." He continued saying she'd be "professional" despite the tense circumstances. “I can’t think of anything unethical or inappropriate that was done,” he told Slate about his experience opposing her," he said.

Thus far, Blasey Ford has been asked to recall what details she remembers of the evening she alleges Kavanaugh and a friend assaulted her. CNBC reported she said he "groped me and tried to take off my clothes." She continued:

He had a hard time because he was so drunk, and because I was wearing a one-piece bathing suit under my clothes. I believed he was going to rape me. I tried to yell for help. When I did, Brett put his hand over my mouth to stop me from screaming. This was what terrified me the most, and has had the most lasting impact on my life.

In 2011, Mitchell, who does not typically speak to press, did an interview with FrontLine magazine, in which she not only described her job, but notably discussed why she's found that, in her work, children and young people tend to not come forward as often as you'd think.

"A very common misconception relates to when and how children tell. People think that children would tell right away and that they would tell everything that happened to them," she said. "In reality children often keep this secret for years, sometimes into their adulthood, sometimes forever." She continued: “False accusations are very rare… The reality is that the authorities, if they are brought in to investigate, can weed out false accusations and the criminal justice system can do that.”

Tracey Westerhausen, another Arizona criminal defense attorney, told CNN that Mitchell is "extremely prepared" for the trial, and that she's "methodical" about how she conducts herself. "She does not engage in courtroom histrionics. You'll never have a gotcha moment where there's a big surprise. She will build her case very carefully and in layers," Westerhausen said.

The hearing is ongoing as of Thursday afternoon.