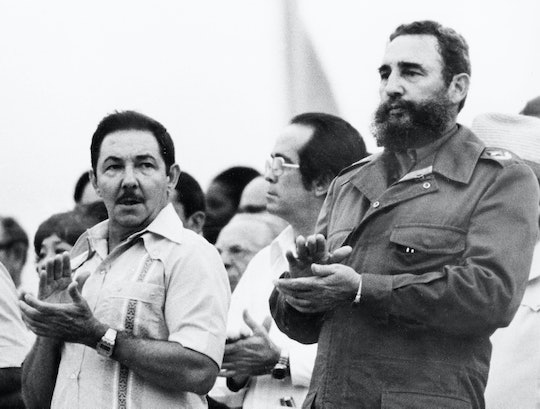 Who Is Raúl Castro? Fidel Castro's Brother Announced His Death

Raúl Castro announced Friday via Cuban state television that former Cuban President Fidel Castro, his brother, had died at the age of 90. While the cause of death has yet to be reported and much remains unseen, many are wondering, "Who is Raúl Castro?" and, more importantly, what does his brother's death mean for the current president of Cuba?

Fidel Castro's health had been in steady decline for over 10 years and since he was hospitalized in 2006 with diverticulitis (although the Cuban government never confirmed diverticulitis as the official cause). During his hospitalization, Castro handed the majority of his power over to his brother and former minister of defense, Raúl. Until that transition of power — one the United States condemned, as it was believed to be just another way for Castro to extend his dictatorship long after his health would have allowed — Raúl was Castro's most trusted confidant. Their close relationship was made all the more obvious when Raúl announced his brother's death, saying in a shaking voice on national television, "The commander in chief of the Cuban revolution died at 22:29 hours this evening." The announcement sent shock waves through Havana, and celebratory cheers among many in Miami.

Prior to officially succeeding his brother in 2008, Raúl served as the head of the Cuban army and as defense minister. As a young man, he joined a socialist youth group and assisted his brother in overthrowing the Cuban government in the late 1950s. While Raúl has never been as popular as his brother, the 85-year-old president of Cuba has made significant changes to the overall political climate by implementing social, economic and political reforms in the country, including the improving relations between Cuba and the United States.

Raúl's willingness to work with the United States was not something his brother, Fidel, openly approved of. Just two days after President Obama visited Havana, the former president penned a passionate letter in a Cuban newspaper, saying, "We do not need the empire to give us anything." Clearly, even though the two shared a close relationship, they had political differences. In fact, in contrast to his bombastic brother Fidel, Raúl is said to prefer to work behind the scenes and somewhat quietly.

While he has been the president for close to 10 years, all eyes will be on Raúl as the potential ramifications of Castro's death are solidified and continue to play out. Regardless, it's safe to say that a new era of Cuban politics, government, and relations with other foreign leaders, is about to begin.