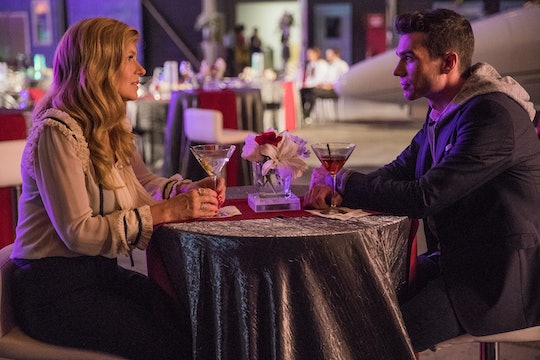 The mystery of Rayna Jaymes's extremely creepy secret admirer (okay, so he's probably a stalker) has been gently simmering for the first five episodes of Season 5. But exactly who is Rayna's stalker on Nashville? We got one step closer to finding out in the episode "Love Hurts."

Importantly, there's been a slight time jump since the last episode, during which we learn from Bucky that Rayna has received four or five more letters like the strange envelope hand-delivered to her mansion, filled with rose petals and a very long love manifesto. The most recent one, Rayna notes, really freaked her out.

But meanwhile, back at the office, she notices the little trinket box that Maddie crafted for her (and which apparently houses contract paperclips) has gone missing. Don't ask how she knows, but Rayna's intuition takes her straight to Randall's desk, where she pulls open a drawer and finds the box. Her social media manager has taken the day off, but she immediately calls him into the office. Unsurprisingly, the next shot features Randall bursting into tears over getting caught. He claims he swiped the trinket as a souvenir to give to his mom (ugh, somehow that makes this even more creepy) — "something special" that once belonged to Rayna.

Bucky pushes him, asking about the letters, but Randall is confused. Understandably not trusting him, Bucky pulls out a notepad and dictates a sentence to Randall, which includes multiple uses of their/there/they're. (Remember that the first letter Rayna received had this grammar mistake.) Not only does Randall's handwriting not match the stalker's, but he also pens the sentence with perfect grammar. (In fairness, it was a little hard to believe a social media manager would have serious trouble discerning between homonyms.)

Randall gets fired (obviously), but that still leaves Rayna and Bucky with the problem of figuring out who her stalker is. The other obvious suspect is Zach Welles, the tech billionaire who worms his way into Rayna's life by offering her a blank check to bail her out of Highway 65's financial struggles in exchange for part-ownership of the record label. He's pushy and inappropriately enthusiastic, but Rayna has yet to really suspect him of anything. Plus, he acts just as pushy and enthusiastic during a run-in with Will Lexington, which might suggest some romantic attraction, but the attention seems just as unsolicited as with Rayna. It's difficult to tell whether Zach truly has nefarious impulses or if he's just a little too forceful in his business dealings.

Eventually, we learn that the real culprit is that selfie taking fan from several episodes ago. Remember, the one who asked Bucky to take a photo of him and Rayna? He appears at the Highway 65 offices and tries to push his way past the front desk to deliver yet another creepy package, but his urgency immediately sets off alarms and, luckily, no one lets him near Rayna. Someone calls the police as Bucky fends him off, but otherwise, we're left with a cliffhanger ending. We'll have to wait till next week to learn more about this mysterious fan's motivations.