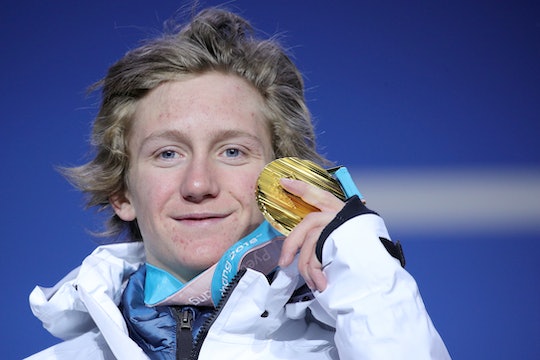 A U.S. athlete finally metaled in PyeongChanng, and it was a gold. Red Gerard, the 17-year-old Olympian, just brought home the U.S.'s first gold in snowboarding and he and his family couldn't be more excited. From humble beginnings in backyard boarding to Olympic success, the teen has had quite the support system backing him all the way through.

Gerard won gold in the snowboarding slopestyle event on Sunday, putting the U.S. on the metals board for the first time in PyeongChange. The young snowboarder entered his third and final run trailing in 11th place, but with an amazing combination of moves — including a backside triple cork 1440 — he earned a score of 86.17, according to Sports Illustrated. When the last few competitors failed to outscore him, Gerard was given the gold.

This was a day of firsts. Not only did Gerard get the U.S. its first gold, he also became the youngest snowboarder to ever win a metal at the Olympics, and the youngest man to win a gold metal at the Winter Olympics since 1928, according to CNN. Suffice it to say that Gerard was surprised by his success. He told the BBC that it was all unexpected:

I was surprised to make it even to the finals of the Olympics and to get first is above me, I don't even know what's going on to be honest. I cannot believe what has just happened — it is insane.

The slopestyle event has only been a part of the Winter Olympics since 2014, when it was first included in the Sochi Olympics. In that round of games, too, an American landed the gold when Sage Kostenberg placed first. Kostenberg was reportedly watching as Gerard followed in his footsteps and has been rooting for him this whole time, according to the Salt Lake Tribune. Gerard was the only American to make it to the metal stand for his category, as two Canadians — Max Parrot and Mark McMorris — took home silver and bronze.

Gerard, whose legal first name is Redmond, brought quite the support system with him to PyeongChanng; a total of 18 friends and family members came to watch him compete. Coming from a large family, Gerard is the second-youngest of seven siblings. He was born on June 26, 2000 and grew up in Westlake, Ohio — roughly 30 minutes outside of Cleveland. His family moved to Colorado when he was seven and he now lives in the town of Silvererthorne, Colorado.

Gerard has been pushing the limits since he was young — walking at nine months, snowboarding by age two, and and doing standing backflips at just 6-years-old, according to the Washington Post. The New York Post reported that he and his siblings even built their own snowboarding park in the back of their Colorado home as children, providing them with ample room to practice. Fast forward to age 13 and Gerard was joining the American national team.

The siblings who practiced alongside Gerard were among those who followed him to South Korea. Brendan Gerard, one of Red's five older siblings and also a professional snowboarder, told Business Insider that he never doubted Gerard's future success:

I said it from Day 1. The kid was 2 years old when we started him snowboarding. I can recall him falling down the hill at 2 and him dragging *ss behind me. Gave it two weeks, and he started moving faster. By 6, it was inevitable he was going to be something huge.

Their father, Conrad Gerard, was also in attendance. He explained to the New York Post that he may not always understand the complex routines, but he was there for his son regardless. “I don’t understand all the tricks he does,” he said. “I asked my boys, ‘Was that good?’ They said, ‘Yeah, it’s good.’” I'll say it was good.

Gerard's Olympic journey isn't over just yet, though. He will now be moving on to the the men's big air competition on Feb. 21 — the first year that the event will be included in the Winter Olympics. Only time will tell if his success will follow him there as well.