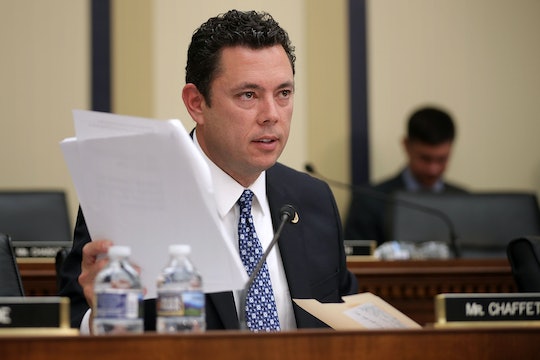 On Wednesday, Utah Rep. Jason Chaffetz announced, via Facebook, that he will not seek reelection in 2018. So who is Jason Chaffetz, and does this news matter to anyone outside of Utah? In a word, yes. Chaffetz currently serves as the House Oversight and Government Reform Committee Chairman, where his actions affect the whole country. Chaffetz wrote that he has "the full support of Speaker Ryan to continue as Chairman," but in less than two years, he'll be replaced. In the past, Chaffetz has alluded to an eventual run for governor of Utah, but for now, he'll return to the private sector: "I may run again for public office," he wrote, "but not in 2018."

According to Chaffetz's official biography, he worked in corporate communications for 16 years. The Salt Lake Tribune reported that the for the bulk of that career, he served as a public relations official for a multilevel-marketing scheme called Nu Skin. He first entered the political arena in 2003, serving as former Utah Gov. Jon Huntsman, Jr.'s campaign manager and chief of staff for two years, and was elected to the U.S. House of Representatives in 2008, where he's remained ever since. But why is he leaving now? Is his work in Congress done?

It's possible that Chaffetz doesn't see a place for himself under the Trump administration. As Oversight Committee chair, he made a name for himself by continually going after former Secretary of State Hillary Clinton for her email server and the Benghazi incident, and seemed to relish the idea of continuing to probe her as a sitting president. He also had little love for President Obama; once calling the president's suggestion to tax millionaires' inheritances "one of the most immoral things you can do." And he famously attacked Planned Parenthood using a chart of false information created by an anti-abortion group.

After the infamous Access Hollywood tape was revealed last October, Chaffetz said that he couldn't endorse Trump "in good conscience," but less than three weeks later, he tweeted that he would still vote for him, because "HRC is that bad." However, his positions appear to align perfectly with the Trump administration; in addition to his tax and Planned Parenthood stances, he's a "religious freedom" proponent and a climate change denier who wants to sell off public land, and has, like the President, called vaccine safety into question.

So it may come as little surprise that the man who's best known for doggedly pursuing Obama and Clinton is hesitant to shift his attention to the leader of his own party. Chaffetz has refused to investigate Trump's conflicts of interest or Russian ties, and when Walter Schaub, the head of the Office of Government Ethics, criticized Trump for refusing to address his conflicts, Chaffetz sent Schaub a letter threatening to investigate him, instead. He also downplayed the Mike Flynn-Russia scandal, and instead of investigating the issue, he called for an an investigation into how Flynn got caught. If Chaffetz no longer has a political opponent in the White House, maybe he sees no point in remaining on the Oversight Committee.