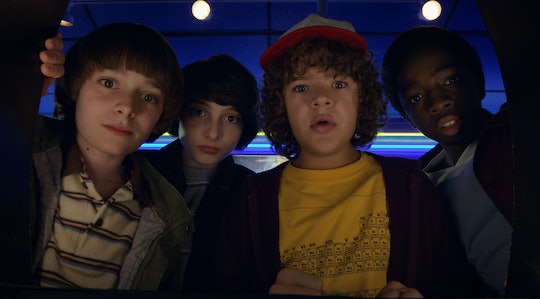 The 'Stranger Things 2' Cast Finds So Many Fan Favorites Returning

Stranger Things 2 is almost here, which means it's time to catch up with some of our favorite characters, but who is returning for Stranger Things 2? Specifically, will our favorite telekinetic heroine be back from the Upside Down, or is she really lost forever? Thankfully, the trailer has given some answers about that, but first, it'd probably be helpful to remember where the first season left off.

Will, along with poor Barb, were taken to the Upside Down by the Demogorgon. Thus, the search for Will began, which led to his mother Joyce frantically trying to contact him through Christmas lights, his friends stumbling upon Eleven, who had powers they couldn't fully understand, and Nancy enlisting the help of Will's older brother, Jonathan, to find her friend Barb.

By the end of the first season, thanks to Eleven, Will was found and safely returned home, although the finale seemed to indicate that even though he made it back to Hawkins, Indiana, he was forever changed by what happened to him in the Upside Down. Unfortunately, Barb wasn't so lucky, and did not return alive. Additionally, Eleven made the ultimate sacrifice in order to defeat the Demogorgon once and for all, but Officer Jim Hopper seemed confident Eleven wasn't gone for good, when he left a box of her favorite waffles in the woods for her.

As you can see, everyone has a lot to deal with, so who is definitely back for Stranger Things 2? Here's the full list.

The defacto leader of his friend group, Mike is back to help his friends deal with whatever monster has now arrived in their hometown.

One of Mike's partners in crime, Dustin is back for Stranger Things 2, and there's no doubt he'll be dropping even more hilarious one-liners this season.

Probably the kid with the most sense on this show, Luke is back to make sure his friends don't get into too much trouble this time around. Good luck with that.

Will is going to be playing a bigger role this season, now that he's been reunited with his friends and has an eery connection to the Upside Down. Although he's back in the real world, it's clear a part of him is still in the other dimension. Hopefully, his friends and family will be able to protect him from whatever's in the Upside Down.

Nancy found herself in a bit of love triangle at the end of the first season. Will she choose Steve or Jonathan in Stranger Things 2? And how will she deal with the loss of her best friend — something most people still don't know about or believe.

Although he started off as the popular mean guy, Steve redeemed himself by the end of the first season, and now he's a fan favorite. It's good to have him back.

Will's big brother is also back for Stranger Things 2. He's not seen all that much in the trailer for the new season, but one would assume he'll also be working hard to protect Will from whatever's coming for him and the town.

Joyce is also back to make sure she never loses her son again, and based on the trailer, she'll do whatever it takes to find out what happened to him in the Upside Down and how to prevent it from happening again.

My favorite cop is back at work, trying to figure what kind of weird stuff is happening in his town now, and how to protect the people of Hawkins.

She's back! The Comic Con trailer for Stranger Things 2 confirmed what fans knew all along. Eleven is still alive, but she is trapped in the Upside Down. However, based on the trailer, she'll be making her way out of there and back to her friends in no time.

You can catch up with all your favorites and some new characters when Stranger Things 2 premieres on Netflix on Friday, Oct. 27.