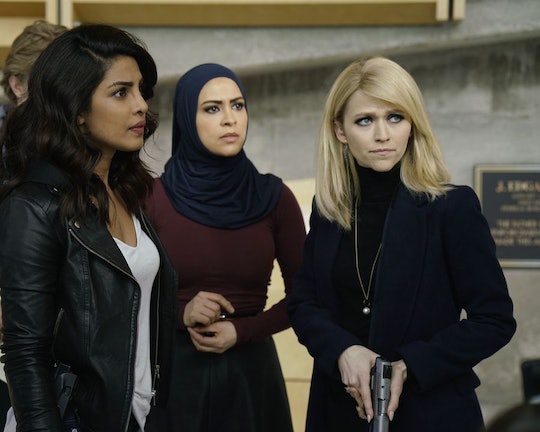 Who Is Returning To 'Quantico' Season 2? The Next Season Needs To Reunite Everyone

Although Season 1 of Quantico has only just ended, fans might be wondering about Season 2. With cliffhangers galore during the finale of the inaugural season, Quantico is certainly shaping up to be a show that fans are going to be waiting for a return on the edge of their seats. Although a date hasn't been officially announced, you might be wondering who will be returning to Quantico Season 2. While the show lost a few key players during the season finale, there is hope that some familiar faces will return once the show comes back. Warning: the following contains spoilers for the season finale of Quantico.

The season finale saw the reasoning behind Liam's corruption, the potential set-up for a co-conspirator (Claire Haas), and the death of a beloved character (Simon). Plus, Alex seemed be considering a job at the CIA, which would certainly make sense considering how her short run at the FBI went for her. While the plot of Season 2 remains just about as big a mystery as who the terrorist was, fans can take comfort in knowing that there will be some friendly faces returning to the show upon its return to ABC.

Although ABC hasn't officially announced it's premiere date for Season 2, Joshua Safran told TVLine that the show doesn't "have anybody for next season yet, beyond our regulars…". So, this doesn't secure Vice President Claire Haas (Marcia Cross) or CIA director Matthew Keyes (Henry Czerny) — shoutout to the Revenge fans who were probably delighted to see Conrad Greyson back on screen — for the second season but it does reveal that Alex, Raina, Nimah, Shelby, Caleb, Ryan, Miranda, and more will most likely be returning to the show. That's a very promising list, assuming that their schedules all allow for them to film during summer 2016 in New York.

Of course, the finale brought along a few curtain calls. Tate Ellington, who plays Simon Asher, will most likely not be returning due to the fact that his character died in the finale (that we know of). The actor posted a very reminiscent Instagram post during the finale, which certainly alludes to the fact that this was his swan song episode.

Also, Josh Hopkins, who plays Liam O'Connor, will most likely not be returning for Season 2, unless it is through flashbacks of Quantico. Hopkins tweeted a rather straight-to-the-point comment regarding his character during the finale.

While it is sad to see these characters go, it makes room for new characters. With the possibility of Alex going to the CIA, opportunities are endless regarding upcoming guest stars, characters, and plot lines. Now, fans just have to wait and see what Quantico writers have in store for a second season. Whatever comes our way, don't get too attached. As fans have learned, no one is safe on this show.