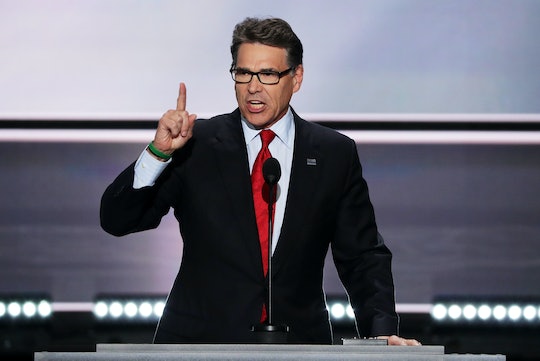 Who Is Rick Perry? The 'Dancing With The Stars' Contestant Wears Many Hats

When the contestants for Dancing With the Stars are announced each season, the "stars" usually make a lot of sense. An Olympian or two is expected, as are at least one or two contestants trying to rehab their image in the wake of some scandal. It's not uncommon to see aging pop stars or child actors who have now grown up. We also tend to get one wildcard every season. This season, the wildcard is Rick Perry. Who is Rick Perry, you may be wondering. Well, let's take a look at this guy to see where he's been in the past, what he's been up to lately, and why he may have made the surprising decision to join Dancing With the Stars.

Perry became a household name in 2012, when he ran for president of the United States. He didn't do very well. Despite being the longest serving governor of Texas in the state's history (he was in office from 2000-2015) and a career politician, Perry is not a strong debater. This became agonizingly clear in one particular 2012 debate in which he struggled for almost a full minute to remember what the third federal agency he would cut if elected president was, eventually ending his epic brain-freeze with the word, "Oops." Oops, indeed.

After this little fumble, Perry's presidential campaign crumbled into ash, and Perry went back to governing Texas. He reappeared in 2015 for another presidential bid, which also flamed out extremely quickly. Despite having early in his campaign called Donald Trump a "cancer on conservatism," he has now somewhat reluctantly endorsed his campaign. "He wasn't my first choice, wasn't my second choice, but he is the people's choice," Perry said. Well gee, with friends like these...

Now that Perry is no longer the governor of Texas, that frees up his schedule to focus on fun things. Like attempting a foxtrot on national television. This, I imagine, will look somewhat like the father-of-the-bride dance if the bride was a showgirl and the wedding was in Reno.

In a tweet, Perry said that he hopes to use the Dancing With the Stars stage to help veterans. Which, sure, I guess it could. I just can't wait to see how this is going to manifest. War-themed dance routines? Veterans as backup dancers? Perry grabbing the mic from Erin Andrews, Kanye-style, and shouting about politics? We'll just have to wait and see, I guess.