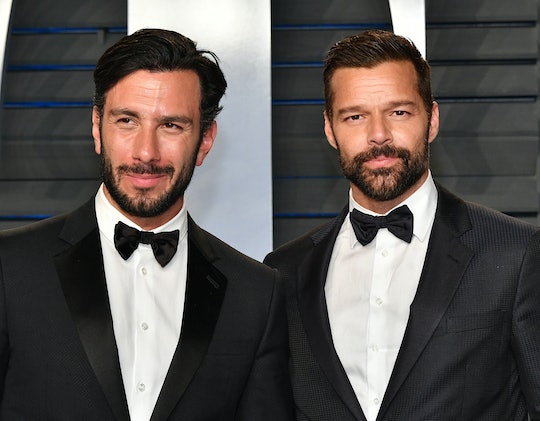 Everything You Need To Know About Ricky Martin's Husband Jwan Yosef

The list of Grammy Award performers includes a diverse lineup, including Post Malone and the Red Hot Chili Peppers, Dan + Shay, Camila Cabello, Miley Cyrus, Janelle Monae, and Ricky Martin. When the 47-year-old singer takes the stage, you can probably expect the camera to pan to the audience to capture the adoration of his very handsome beau. But who is Ricky Martin’s husband? The man is much more than a pretty face, he’s also an accomplished artist.

Jwan Yosef is a Syrian-born, Swedish painter who Martin married early in 2018, according to E! News. The pair met on Instagram, he told People at the time. “I’m scrolling and I see this beautiful piece of art and I’m like, ‘Whoa, how cool! Who’s this?’ Then I start clicking and all of a sudden I’m like ‘Ooh, ooh.’ And then I wrote to him,” Martin told the publication. In April 2016, they debuted their romance on the red carpet for the amFAR Inspiration Gala, Entertainment Tonight reported.

According to his website, Yosef received his education at the Pernby School of Painting and later at the Konsfack University College of Arts in Stockholm. He earned an MA in Fine Art at Central Saint Martins in London, where he lives and works now. He’s had dozens of both solo and group exhibitions since 2007 and has won a few awards, as he shared on his site.

Yosef works on canvas and Perspex, a surface similar to Plexiglass, according to Beat Magazine. When asked about his process with the unconventional material, he told the publication: “It’s like painting in reverse... I paint on one surface of the Perspex and from there I add layers backwards in order to finally present the mirrored unpainted surface. It’s really thinking in a backward manner.”

The couple’s dating life was the stuff of modern-day romance. They spent six months writing back and forth before ever meeting. “We were just talking about life and existential issues,” Martin told People. But when they met, it sealed the deal — the singer told the magazine his first thought was that he was going to marry Yosef and apparently the artist had the same thought. “Obviously he only told me later on,” Martin told People. “You have to keep it to yourself at first.”

In 2016, Martin revealed on The Ellen DeGeneres Show that he’d popped the question, according to USA Today, but there was no announcement of a wedding date. Then, while doing press for his show, The Assassination of Gianni Versace, Martin revealed that they’d opted for a private ceremony, according to HuffPost.

Asked whether he was a fiancé or husband Martin said, according to USA Today: “I’m a husband, but we’re doing a heavy party in a couple of months. We’ve exchanged vows, and we swear everything, and we signed all the papers that we needed to sign — prenups and everything.”

And 2018 ended with another celebration for the couple, when they welcomed a baby girl to their family, according to NBC News. The birth of Lucia Martin-Yosef was announced on Dec. 31 on Instagram.

In Yosef's announcement, he wrote: "We are beyond happy to announce that we have become parents to a beautiful and healthy baby girl, Lucia Martin-Yosef. It has been a special time for us and we cant wait to see where this stellar baby will take us. Both her beautiful brothers and me and Ricky have fallen in love with Lucia."

Martin and Yosef also parent a pair of 10-year-old twin boys that Martin had via a surrogate, according to E! News and Martin told the outlet that he’s nowhere close to done. He previously revealed to the news outlet that he’d like four more pairs of twins. For now though, it seems there are totally content and smitten with their new little girl.

Be sure to catch Ricky Martin on the Grammy Awards, which airs on Sunday, Feb. 10, starting at 8 p.m. ET.