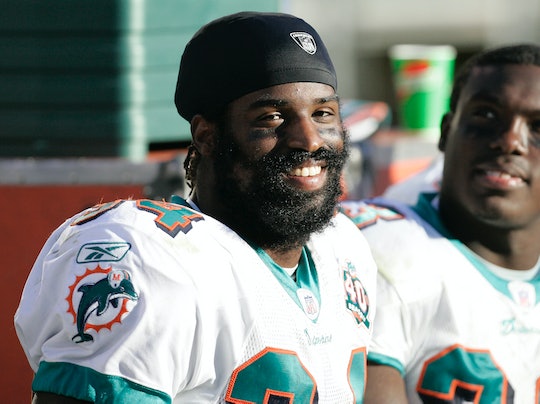 The second season of Celebrity Big Brother has a whole new crop of contestants this time around. So whether your favorite celebs come from the worlds of sports, politics, wrestling, or reality TV, there should be someone you'll enjoy watching and many of them you'll recognize. If you're a football fan, you'll know who Ricky Williams is — but if not you may have to do a little research because Celebrity Big Brother is welcoming him as one of the competitors this season.

Ricky Williams is a former professional football running back, with a slew of impressive professional credits. In addition to playing for three NFL teams, he also played for one CFL team, as well as college football for the University of Texas.

According to his stats on the NFL website, Ricky started out playing for the New Orleans Saints in 1999, and remained on the team until 2001. In 2002, he was traded to the Miami Dolphins, where he played until 2006. In April 2006, the NFL banned Ricky from the organization for one year for "violating the substance abuse policy," ESPN reported at the time.

"I'm disappointed with the decision but I respect it," Ricky said in a statement following his suspension, as per ESPN. "I'm proud of my association with the National Football League and look forward to returning to the Dolphins in 2007."

In the meantime, Ricky ventured up north. The month after his suspension was announced, Ricky joined the Toronto Argonauts, a CFL (Canadian Football League) team on a one-year contract, as per the New England Patriots' website. During his year playing for the CFL, he was the league's highest-paid player, with a $240,000 salary.

After one year in Canada, Ricky moved back to warmer weather and rejoined the Miami Dolphins. Then, in 2011, Ricky signed a contract with the Baltimore Ravens. He played for the team until 2012, when he announced his retirement, as per ESPN. Since retiring, Ricky has turned his focus into a very different directions. He is a huge advocate of the legalization of medical marijuana, and he even started his own herbal brand called Real Wellness by Ricky Williams, which features many products with cannabis, as reported by USA Today. Additionally, he has become very passionate about astrology and yoga, which he teaches in California at the Ra Ma Institute.

Based on an interview with ET Canada, Ricky seems pretty psyched about moving into the Big Brother house, even though he's only seen a few episodes of the show. "I'm not very familiar with Big Brother, but I'm the kind of person that just likes to jump into experiences," he told ET Canada. He also said that he thinks his experience playing football for so many years will help him on Celebrity Big Brother, since he is accustomed to navigating a team dynamic.

That said, I am just a little nervous about Ricky on Celebrity Big Brother. When the ET Canada host quizzed him on typical Big Brother lingo, such as POV and backdoor, he made it clear that he still has some studying up to do.

You can root Ricky on when Season 2 of Celebrity Big Brother debuts: Monday, Jan. 21 at 8 p.m. on CBS.