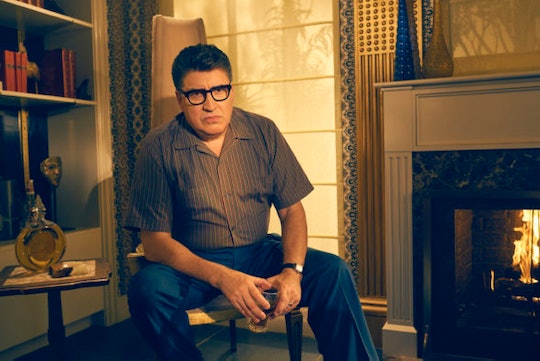 Robert Aldrich Played A Big Part In This 'Feud'

Feud: Bette and Joan is Ryan Murphy's latest anthologized series for FX, the first season of which is dedicated to the rivalry between Golden Age Hollywood actresses Bette Davis (played by Susan Sarandon) and Joan Crawford (played by Jessica Lange). While their feud lasted for decades until their deaths, the miniseries hones in on the production of a campy horror film Davis and Crawford made late in their careers, in an attempt to resurrect Hollywood's interest in them. But who is Robert Aldrich on Feud? The director behind the tempestuous 1962 film that brought these women together plays a big role in the miniseries.

Alfred Molina joins the deep bench of actors to play Aldrich, who directed the Davis and Crawford-starring Whatever Happened to Baby Jane? He was infamous for his aggressive filmmaking style, which helped fuel the drama both behind and in front of the camera. But Aldrich was also integral to the feud. Work for both Crawford and Davis, well into their 50s at the time, had slowly dried up after their vivacious film careers of the 1930s and 1940s. Crawford joined Baby Jane first, but she knew she needed a headline-grabbing co-star to make sure the film blew up.

In the trailer for Feud, we see her lobbying Aldrich, promising to deliver a co-star that would drum up huge publicity for the film. She approaches Davis with the script, who somehow accepts the co-starring role, in spite of their long-standing beef. Next, it's up to Aldrich to sell studio head Jack Warner (played by Stanley Tucci) on the film. Naturally, he's reluctant because of the actresses' ages. But everyone agrees to work together with the implicit knowledge that their rivalry is what's going to sell this film.

In the miniseries, we see Aldrich stoking the feud, both for media attention (with the help of gossip columnist Hedda Hopper) and to inspire the actresses' performances. Of course, that took its toll on set. According to Shaun Considine's book about the feud, Crawford and Davis would both call the director at night after a long day of filming to complain about the other actress for hours. The two would torture each other during filming, too, with a couple of well-documented stunts depicted in the miniseries. During Baby Jane's fight scene, Davis actually kicked Crawford in the head. In retaliation, Crawford wore a lead weightlifter's belt under her costume for a scene where Davis had to drag her, knowing that it would aggravate Davis' back problems. Aldrich was left simultaneously refereeing and maintaining the grudge match.

Feud promises an appropriately campy look at the making of Baby Jane, and you can catch it beginning March 5 at 10 p.m. ET on FX.